Adam McQuaid Hard to Keep Down 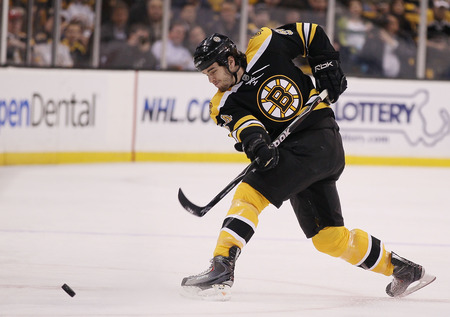 **Story Courtesty of the Boston Herald

PHILADELPHIA — A couple of weeks before the lockout-shortened season began, Adam McQuaid looked like a shell of his former self, his once-strapping frame still gaunt from the two emergency surgeries he had undergone in October after a blood clot was discovered near his collarbone.

But when the Bruins opened the season on Jan. 19, McQuaid was in the lineup.

And just last Sunday, the defenseman looked like he might be out for a while as he peglegged his way around the pressbox due to an apparent knee injury, courtesy of a questionable check from Pittsburgh’s Matt Cooke.

Yet there McQuaid was last night at the Wells Fargo Center, back in the lineup against the Philadelphia Flyers for the 5-2 B’s loss.

It’s that kind of toughness that made McQuaid the Bruins’ nominee for the Masterton Trophy, given annually by the Professional Hockey Writers’ Association to the player who best exemplifies, perseverance, sportsmanship and dedication to hockey. Each team nominates one player and the winner is chosen among the 30 nominees.

When told he was the Boston chapter’s nominee, McQuaid responded with humility.

“It wasn’t something that I’d even given any thought to, so it kind of took me by surprise a little bit. But any time you’re talked about for an award like that, it’s humbling,” McQuaid said. “I don’t want to say the same things that everyone says, but it is an honor and it is humbling. I think I still have some persevering left to do here, but I’m trying to work through everything that’s gone on and I’m trying to keep push forward. That’s the attitude you have to have when you seem to be facing adversity.”

On top of the aforementioned health issues, he also had to miss 11 games due to a shoulder injury.

“Yeah, it hasn’t been an ideal year,” he said with a smile. “It’s not what I would have wanted. But I don’t know another way to look at it. It’s just how things have played out and I don’t have any other choice other than to just try and work through things.”

Has he felt 100 percent yet since the two surgeries?

“Well, it was always a work in progress,” said McQuaid, who played 15:57 and was a minus-1 last night. “I tried not to necessarily think about it. If nothing else, I at least wanted my work ethic to be there, and I have no regrets as far as that’s concerned. And I don’t really want to think about it too much now. I’ll evaluate everything more at the end of the year. I don’t want to be thinking too much about it where I’m at. I just want to keep working hard and physically I just want to give everything I’ve got right now.”

“That’s a thing that at times got overlooked, not by everybody, but he had quite an experience during the lockout that could have been devastating, and that always leaves a little bit of a scar,” Julien said. “But he fought through that and he’s come back and he’s had his challenges with other injuries. What he’s had to battle through, endure and live through were pretty traumatic. For him to be nominated for that is fitting.”