Bulldogs Bite Back at Wolves 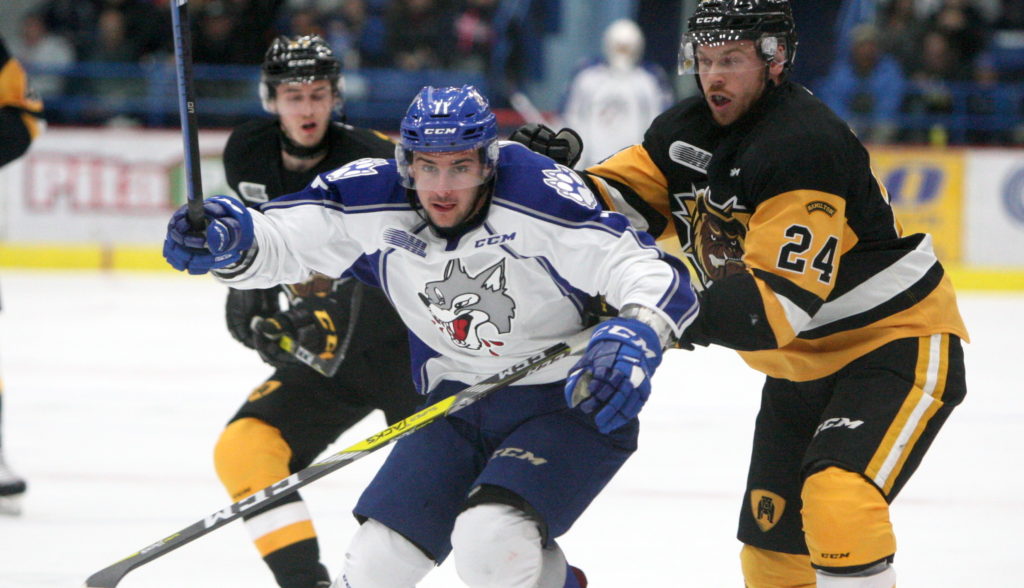 The Sudbury Wolves traveled to Hamilton on Saturday to battle the Bulldogs in the second game of the home & home series. The Bulldogs were out for revenge after the Wolves ended their four game win streak Friday night in Sudbury, and they were successful as they skated away with a 4-2 victory over the Wolves.

Carrying over the momentum from Friday’s game DMITRY SOKOLOV came out hard and struck first giving the Wolves a 1-0 lead. KYLE CAPOBIANCO and CJ YAKIMOWICZ picked up the assists on the play. The goal marked SOKOLOV‘s fourth goal in four periods. It only took the Bulldogs a minute and a half to answer back, with MATTHEW STROME putting one past ZACK BOWMAN to tie up the game. The game picked up at the end of the first period allowing BOWMAN the opportunity to showcase his athleticism with a great save to keep the game tied at one.

MICHAEL PEZZETTA gave the Wolves a 2-1 lead halfway through the second period after he banged a loose puck past Bulldogs goaltender KADEN FULCHER. The Bulldogs took advantage of Woves’ penalty trouble as they capitalized on the power play with a goal from WILL BITTEN to tie the game back up at two. MICHAEL CRAMAROSSA then beat BOWMAN on a breakaway with 1:03 left in the period to give the Bulldogs their first lead of the game. The Wolves trailed the Bulldogs 3-2 at the end of the second period.

Despite some excellent chances in front of the FULCHER in the third period, the Wolves could not find a way past the net minder who made multiple great saves throughout the final 20 minutes. The lone goal of the period came from MACKENZIE ENTWISTLE as he scored a shorthanded breakaway, giving the Bulldogs a two-goal lead. With tension boiling over, extra activity ensued after whistles with ALAN LYSZCZARCZYK and YAKIMOWICZ both getting involved with Bulldogs players. The Wolves fell by a final score of 4-2, with shots on goal 37-29 in favour of the Wolves.

The Wolves close out a busy weekend on the road tomorrow evening with a 6:05pm puck drop in Oshawa against the Generals. Fans can follow the Wolves on the road by following us on Twitter and Facebook.

The Wolves are back in action at home next Friday night when the Peterborough Petes come to town. Game time is 7:00pm. To purchase tickets, visit the Sudbury Arena Box Office, call 705-671-3000 or visit greatersudbury.ca/tickets.