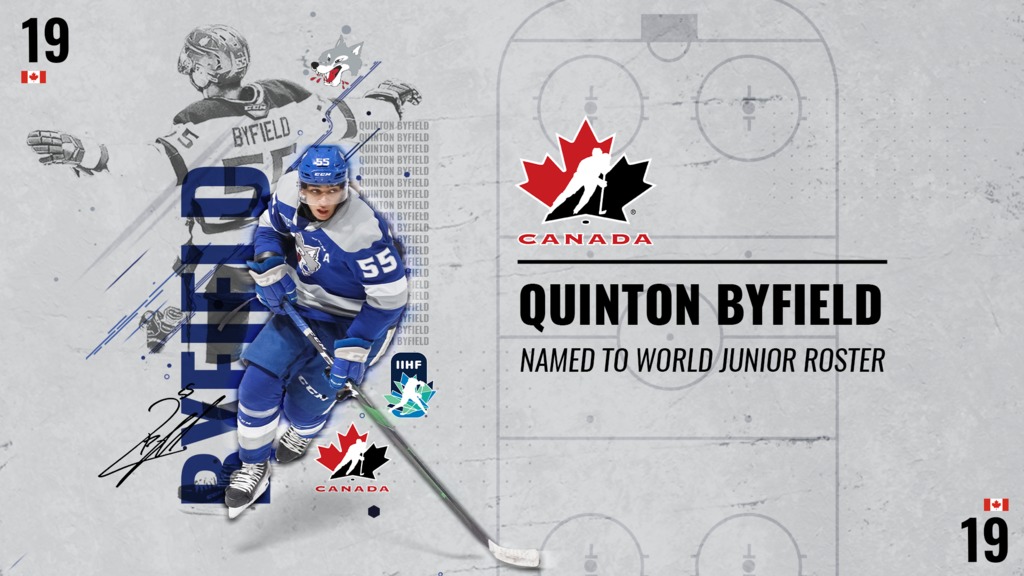 The Sudbury Wolves are proud to announce that Wolves forward, Quinton Byfield will be returning to Team Canada for the 2021 World Juniors.

The Wolves wish to congratulate Quinton Byfield on being named to the roster for Canada’s National Junior Team. Byfield is one of six returning players who won gold at the 2020 World Juniors, while also leading the Wolves offensively on the ice with 82 points in 45 games last season.

Although it has been an unconventional year, Wolves’ Quinton Byfield has had much success. Start of 2020, capturing the World Juniors gold medal with Canada’s 2020 National Junior team. Byfield finds joy in giving back, launching Q’s Kids in partnership with the NEO Kids Foundation. Byfield was named to Wolves’ leadership team, receiving an “A” on his jersey. In October, Quinton Byfield was selected 2nd overall by the Los Angeles Kings during the 2020 NHL Entry Draft. The 6’4, 215-pound centre signed a three-year entry-level contract shortly after on Oct.16th. Now, Quinton will represent Team Canada’s National Junior team once again to defend their championship for a back-to-back gold medal!

The 2021 IIHF World Junior Championship is set to take place on December 25th on Canadian ice in Edmonton and Red Deer. Team Canada’s first game will be held on Boxing Day as they take on Germany at 6pm, ET.

RED DEER, Alta. – Following a 26-day selection camp that was interrupted by a mandatory two-week quarantine, 25 players have been named to Canada’s National Junior Team for the 2021 IIHF World Junior Championship, Dec. 25-Jan. 5 in Edmonton, Alta.

“This camp has been unconventional from the outset with the number of players invited and the length of camp, along with the schedule adjustment due to our two-week shutdown, but we feel we have selected a group that will give us the best chance to defend our gold medal on home ice,” said Millar. “It is never easy making decisions to trim down a roster, especially when every player handled adversity, faced challenges head on and remained committed to the process through our off-ice workouts and Zoom sessions. We have a lot of people to thank, including the people of Red Deer, the Red Deer Rebels (WHL) and Alberta Health Services, who worked with us to always ensure the health of safety of our athletes, staff and the community at large, and we look forward to representing Canada in Edmonton.”