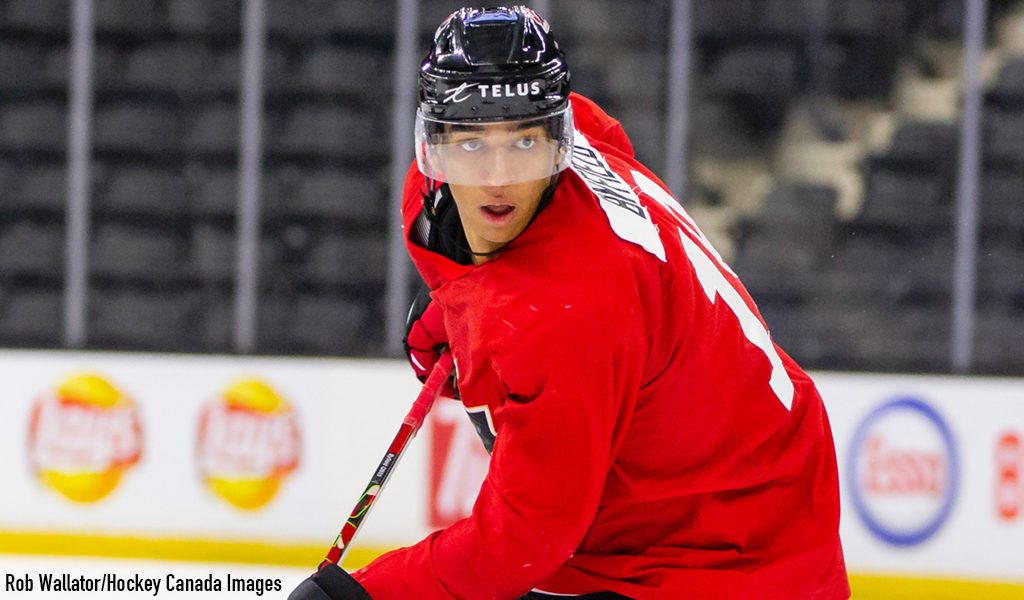 A year can make a lot of difference, especially when that year has been as accomplished as Quinton Byfield’s has been.

Between winning a gold medal with last year’s World Juniors squad, leading last season’s Central Division champion Sudbury Wolves with an 82-point sophomore campaign and being chosen second overall by the Los Angeles Kings at the 2020 NHL Draft, it’s been an eventful year for the 18-year-old.

Now, he’s eyeing a Team Canada return with a bigger role, but knows it’s an assignment to be earned, not expected.

“I don’t want to say I’m expecting a bigger role, you have to earn it here,” said Byfield last week. “Just trying to get back on the ice and earn that role. I definitely want a bigger role but you take any role that you’re given, just go with that, and work your way up.”

It would seem he’s well on his way. When the Kings prospect stepped onto the ice for the first time at Hockey Canada’s National Junior Team Selection Camp last Thursday, head coach Andre Tourigny – who served as an assistant on the bench last year – spoke to the forward’s “huge” improvement.

“He was a man out there,” said Tourigny following Thursday’s skate. “I really like his intensity, I really like the way he worked, I like his big body, he’s strong. I like the way he handles the puck, his presence on his one-on-one, the way he could close quickly and defensively on his men…you could see a big improvement.”

Part of the larger role Byfield’s gunning for would inevitably involve bringing a veteran presence to this year’s team and relaying the same advice he garnered from some of the older players he looked up to as a 17-year-old last winter; guys like Ty Dellandrea and Liam Foudy.

“They gave me pointers here and there, what to do in certain situations, what the coaches want in you and if I didn’t understand something, they’d come over to me and give me little pointers like that where I should be in the D zone, playing with a little more body, system stuff like that and they told me to not be too nervous out there,” said Byfield.

“Last year was a great experience. Just getting to experience the older guys and how they carry themselves and what it really takes to win a gold medal. Hopefully me along with a couple other guys can bring that veteran presence and carry it on to the other guys and hopefully we go back to back here.”

Over the extended offseason, Byfield emphasized building up his strength and tacked on 10 pounds of muscle, hoping to evolve his physical game while continuing to use his 6-foot-4 frame to his advantage.

Another area of improvement he spoke to was his confidence, something he mentioned would likely be strengthened by the opportunity to play on home soil this year, albeit without any fans in the stands.

“Anytime coming to camp you’re a little nervous, anxious, excited so I think all those feelings are the same but I’m definitely a little more confident. I just want to step up my game and play a bigger role this year.”

Byfield confirmed he and general manager Rob Blake discussed plans for him to join the Kings after the tournament’s end. Until he sports an NHL jersey for the first time, all focus is sporting the maple leaf for a second run.

And though this would be his second appearance on the World Juniors stage following last year’s gold medal, this year’s preparation isn’t necessarily without its pressure – something he hopes will only help him in the long run.

“I wouldn’t say there’s less pressure, I think there’s always pressure. That’s what you want as a hockey player. You have to use that to your advantage and nothing’s really given to you and you have to work for it,” he continued. “I’m just excited to be here and to work for another spot on the team this year and defend gold.”