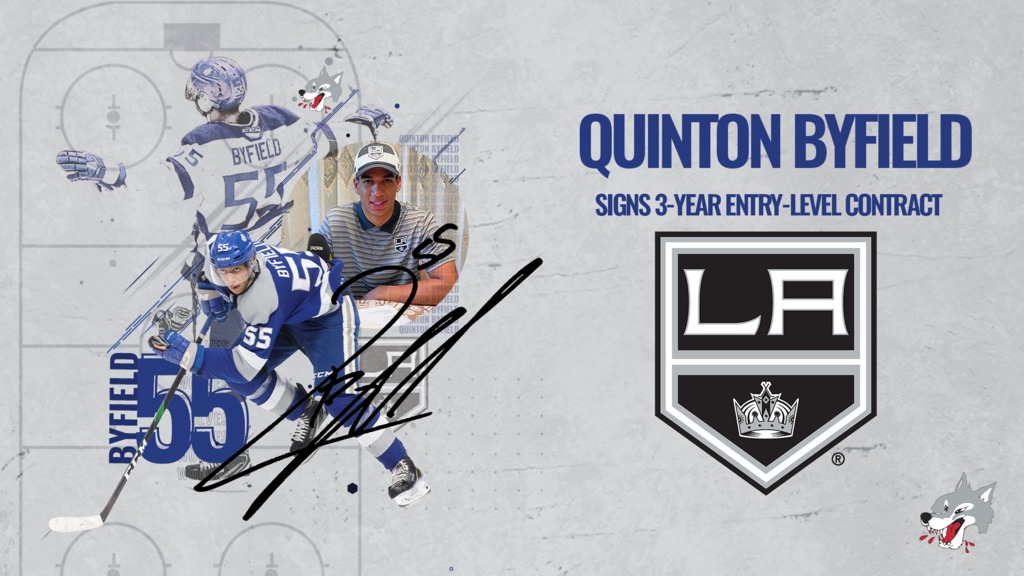 (Greater Sudbury, ON) The Sudbury Wolves are pleased to announce that Quinton Byfield has signed a three-year entry-level contract with the LA Kings.

Wolves’ #55 Quinton Byfield is expected to continue to wear #55 for the Kings. Byfield joined the Kings organization last week when selected 2nd overall during the 2020 NHL Entry Draft.

“We are thrilled that Quinton Byfield capped off the week with his signing to the Los Angeles Kings,” said Sudbury Wolves VP and General Manager Rob Papineau. “They are getting an elite player and an elite person.”

BIG NIGHT for Quinton Byfield!! 😱
Drafted 2nd overall by the @LAKings in the 2020 #NHLDraft making him the highest ever drafted Wolves player in franchise history. 🔥 Congrats!🤩#runwiththepack🐺 | #2020NHLDraft | @NHL | @byfield55 pic.twitter.com/bmVVOyB1Ex

History has been MADE 👊 Quinton Byfield becomes the highest-ever drafted Black Player in the @NHL history.

Byfield, who is expected to wear #55 for the Kings, joined the organization last week after being selected second overall in the NHL Draft on Oct. 6.

The 6-4, 215-pound center registered 82 points (32-50=82) in just 45 games last season with the Sudbury Wolves of the Ontario Hockey League (OHL). The native of Newmarket, Ontario led the Wolves in points and assists while finishing second in goals.