Byfield, Thompson and Phillips give nod to Wolves’ development 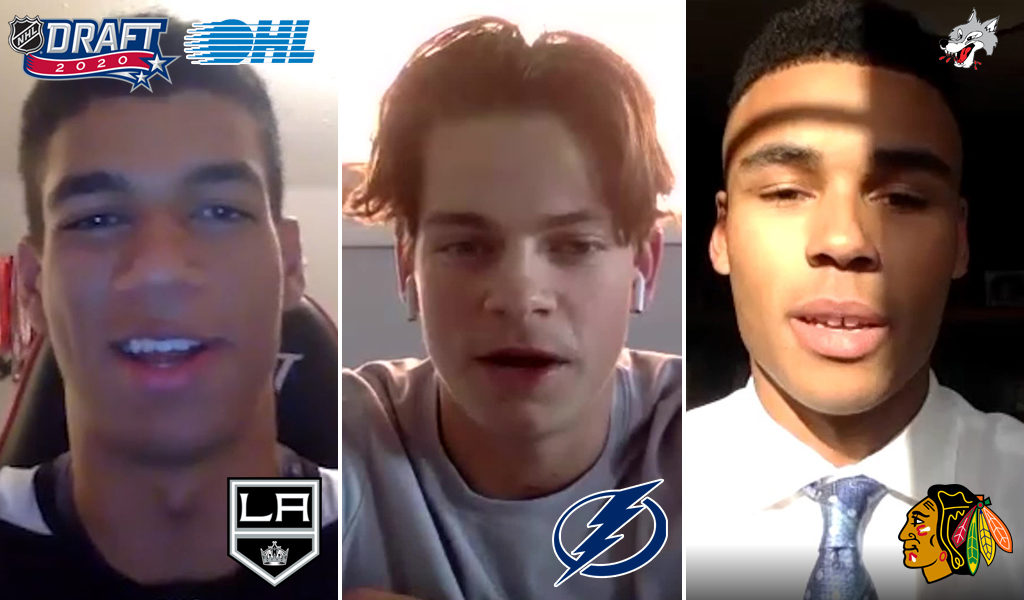 The Sudbury Wolves organization has pumped out a wealth of talent over the years, and the 2020 NHL Draft was no different.

On Oct. 6-7, a trio of Wolves skaters were welcomed to NHL clubs in star centreman Quinton Byfield, and defencemen Jack Thompson and Isaak Phillips – the most NHL draftees out of the Wolves organization since 2011. It was undoubtedly a strong year for the club, and all three skaters gave a nod to the organization upon hearing their names called over the two-day virtual event.

Byfield made franchise history as the highest-ever drafted member of the Wolves when he was taken second overall by the Los Angeles Kings, edging out Mike Foligno who went third overall to the Detroit Red Wings at the 1979 NHL Draft. Following his historic moment, Byfield pointed to Wolves head coach Cory Stillman, a seasoned NHLer and two-time Stanley Cup champion, in helping him expand his game and excel over his two-year OHL career.

2nd overall @LAKings choice Quinton Byfield (@byfield55) led the way for the #OHL, becoming the highest-drafted player in @Sudbury_Wolves franchise history as they produced three selections for the first time since 2011.

“Cory’s helped me quite a bit. He’s been through the process and has played over 1,000 NHL games, won the Cup, so whatever knowledge he gave me I definitely took to heart and really tried to put that into my game,” said Byfield in a Zoom call following day one of the draft. “Before coming to the OHL, I don’t think I was ever in my D zone, that’s what I tell everyone, and then coming in, he definitely helped me work in the D zone, penalty kill and all that so he’s really translated my game and really helped me.”

Coming off an 82-point season and a gold medal performance with Team Canada’s World Juniors team, he spoke to his confidence in his ability to make the NHL as soon as possible.

“I definitely think I can step into the NHL next year, but I know it’s a really big jump from the OHL,” he said.

“He’s played over 1,000 NHL games and won a Cup. Whatever knowledge he gave me I took to heart.”

Fellow Wolves Thompson and Phillips were selected 93rd overall by the Tampa Bay Lightning 141st by the Chicago Blackhawks, respectively.

Thompson, a versatile right-handed defender who notched 32 points on the Sudbury blue line, also credited Stillman with helping him develop into the player he is today, both on and off the ice.

“Cory’s been great with me. He played a lot in the NHL, won a couple Stanley Cups and his son went through the same thing as me, Riley Stillman, as a young defenceman,” he said. “He taught me a lot, especially off the ice, to be a work force in the gym and then good things will happen.”

“Be a workhorse in the gym, have good habits and good things will happen.”@Sudbury_Wolves defenceman Jack Thompson (@jackthompson_22) shares wisdom imparted to him by head coach Cory Stillman after being chosen 93rd overall by the @TBLightning in the 2020 #NHLDraft ? pic.twitter.com/dMM8hnUCI9

Phillips, a two-way, 6-foot-3 defenceman with a good reach, was thrilled to have been chosen by Chicago, stating “I don’t think it could’ve played out any better” and that “Chicago is one of the top places he wanted to be.”

When asked about his vision for next season, he expressed his optimism about the Wolves’ upcoming campaign.

“This year my plan is to go back to Sudbury. We should have a pretty good team there,” Phillips said. “We should have a strong year, so another good year in the OHL and then who knows after that.”

Since 1998, 43 Wolves players have been drafted to 22 different NHL clubs, including big names like Nick and Marcus Foligno, Marc Staal, Mike Fisher and Derek McKenzie.