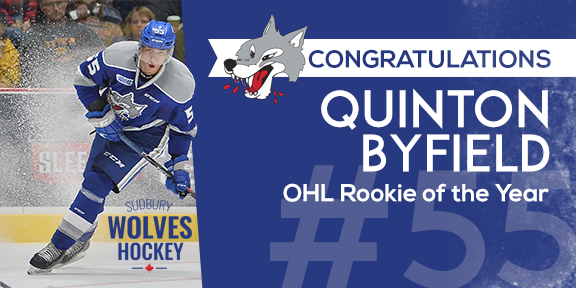 (Greater Sudbury, ON) The Sudbury Wolves, in conjunction with the Ontario Hockey League are pleased to announce that Newmarket, ON native, Quinton Byfield, has been voted as the Emms Family OHL Rookie of the Year.

“Quinton came into our league as the top draft pick and had an outstanding first season,” said Sudbury Wolves VP Hockey Operations and General Manager, Rob Papineau. “He met all expectations offensively and he took huge steps forward in his overall game.  He became a very trusted player at a young age to have on in the final minute of a game while protecting a lead and he became a very good penalty killer to compliment his natural offensive ability.  We are proud and happy for Quinton, he truly deserves this recognition in what was an outstanding rookie class of players in the OHL,” he added.

“It’s a huge honour to receive this award,” said Quinton. “There were so many great rookies this year that could have been chosen to win this award. I couldn’t have achieved this without the help of my coaches and teammates. They gave me every opportunity to succeed and put a lot of trust in a 16-year-old which is very humbling. I also can’t thank my family and billet family enough for their support. This wasn’t just achieved by myself, but with everyone I love and care about.”

In 64 regular season games, Quinton scored 29 goals and added 32 assists to sit second in Wolves scoring through the regular season. He also added 3 goals and 5 assists in 8 playoff games. 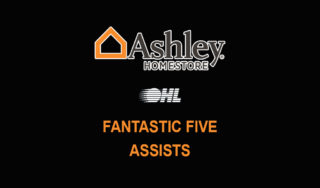