Catch Up With Everything Byfield And Team Canada, 2019 Hlinka Gretzky Cup 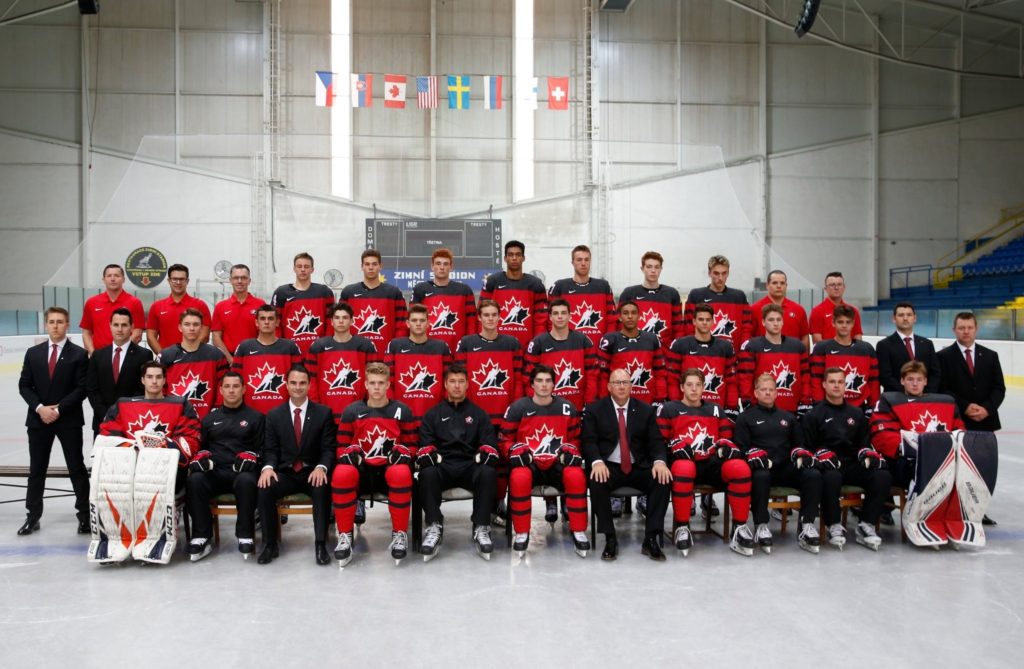 Friday, August 9th Team Canada played hard and fought to the end, resulting in a shootout win 3-2 over Sweden.

GAME OVER!! @ColePerfetti91 scores three times in the shootout and twice in regulation time to lift 🇨🇦 a 3-2 win over 🇸🇪,and a berth in the #HlinkaGretzkyCup 🥇 gold medal game against Russia!

Great efforts from both teams were on display with Canada coming out on top scoring in round 8 of the shootout.

#goalperfectti scores 3 TIMES in the shootout. Seals the deal with this beauty. Yep, worthy of that celly. pic.twitter.com/5HDBhtKTZk

Hockey Canada shared a great feature on the development of Byfield’s passion for the game, the support of his parents helping him to pursue his dreams and making it a reality.

Wednesday, August 7th Team Canada defeated Czech Republic 7-1 finishing the preliminary round with a perfect record 3-0. With such a dominant presents Team Canada managed to obtain 21 goals over their 3 victories.

GAME OVER! 🇨🇦 closes out a perfect preliminary round at the #HlinkaGretzkyCup with a 7-1 win over 🇨🇿.

It'll be 🇨🇦🆚🇸🇪 in the semifinals on Friday.

Wednesday’s match was a good end in the preliminaries for Team Canada and, also one heck of a game for Quinton Byfield having scored two jaw dropping goals!

Quinto Byfield definitely showed us that every second counts, by scoring a late first period goal with exactly 2 seconds left to make it 2-0 for Canada!

@byfield55 with a power play GOALL! 🙌
His first goal of the tournament comes in at the perfect time 🤩 with just over 2 second left in the 1st! 🏒 Making it 2-0 🇨🇦#runwiththepack #HlinkaGretzkyCup pic.twitter.com/LDAbCOovVe

At the 6:40 mark in the second period, Quinton Byfield again sets off the buzzer for Canada’s third goal with a flashy between-the-legs shot! You’re going to want to watch this one repeatedly, believe us!

Quinton Byfield, intermission takeover round 2! Byfield shares what he took from last year’s U-17 camp and how he’s been applying it now. Byfield learned and puts to work playing the “Canadian Way” a 200-foot game every time, “Competing for every battle, trying to come out on top, and do everything for your team.”

Hey @Sudbury_Wolves fans. @byfield55 getting the HON Honours. #JayAndDan know a HON when they 👀 it. https://t.co/7L9jijbfmo

Tuesday, August 6th Team Canada makes another high scoring appearance in this tournament with another shutout, 8-0 win over Switzerland.

GAME OVER! @ColePerfetti91 and @Lapiz92 each pot 2G and 1A, and @DylanGarand31 picks up the shutout in a 8-0 win for 🇨🇦 over 🇨🇭. #HlinkaGretzkyCup

Quinton Byfield, takes off in full speed looking to make an opportunity to score Canada’s first goal of the game at 0:37 into the 1st period. With great intentions, Byfield unfortunately comes out with a goaltender interference penalty.

Quinton Byfield is so big he gets penalties for just playing – like those kids who grew too quickly in Atom hockey.

Not long after Byfield assists by putting together a beautiful pass setting up Ryan O’Rouke for a redirection goal at 10:29 in the 1st making it 2-0 over Switzerland.

Quinton Byfield, takeovers during the 2nd intermission interview. Byfield expresses he’s not surprised by the high amount of scoring, as the team consists of a great group of guys with a lot of skill. Byfield points out “we’re not selfish.., and playing as a whole.”

His two-way game continues to leave an impact on the ice for Team Canada as Byfield proclaims that this is the strength of his game.

Team Canada hit the ice on Monday, August 5th with a 6-0 victory over Finland as the opening game to the tournament.

GAME OVER! @lennox30_ finishes the shutout to backstop 🇨🇦 to a 6-0 win over 🇫🇮. #HlinkaGretzkyCup

Canada’s scoring started early into the game with the first three goals occurring within the 1st period.

Quinton Byfield sets up Seth Jarvis with an incredible backhand pass, and Jarvis responds and makes no mistake scoring the 3rd goal at 19:23 in the 1st.

Congratulations to Quinton Byfield as he represent Hockey Canada at the 2019 Hlinka Gretzky Cup in the Czech Republic.

Next up, Team Canada goes for the Gold Medal against Russia. You can catch the game on TSN at 11am Saturday, August 10th.