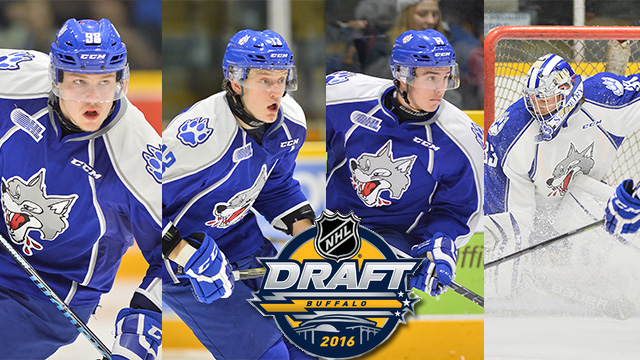 SOKOLOV was ranked 129th among North American skaters. The Omsk, Russia native finished the season 4th in league rookie scoring and first among the Wolves in goals scored with 30 goals and 22 assists in 68 games.

LYSZCZARCZYK was ranked just behind Sokolov at 134th among North American Skater’s. Alan may still see his stock rise prior to the draft as he will be competing with Team Poland at the 2016 IIHF Ice Hockey World Championships Division I Group A in Katowice, Poland at the end of April.

PEZZETTA worked his way back on Central Scouting’s radar down the stretch of the season. Michael more than doubled his point totals this season and was one of the Wolves’ hardest working players game in and game out.

Finally goaltender TROY TIMPANO was ranked 19th amount North American Goaltenders. Despite an injury early in the season that held him out of the line-up for almost two months, Troy returned to the line-up in December eager to play.

The NHL Draft is set to take place on June 24th and 25th in Buffalo, NY.