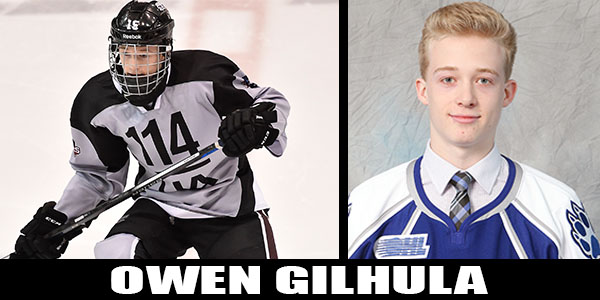 The Sudbury Wolves are pleased to announce that forward OWEN GILHULA has committed to the Sudbury Wolves by signing an OHL Standard Player Agreement. Owen was selected by the Wolves in the 2nd round of the 2016 OHL Priority Selection, 34th Overall.

“We are very pleased and excited to welcome Owen to the Wolves family,” said Sudbury Wolves General Manager Barclay Branch. “Owen is a talented, highly skilled player with strong character, and it is these qualities that make him such an important part of the Wolves’ foundation and future success.”

Owen is a product of the Huron Perth Lakers and participated in the 2016 OHL Gold Cup for Team ALLIANCE. He was also selected to attend Hockey Canada’s Under 17 National Summer Evaluation Camp, which takes place in Calgary, AB from July 28th-August 1st.

“I am really excited to be a part of the Sudbury Wolves organization,” said Owen. “The team has a bright future ahead of it and it would be a huge honour for me to be a part of it.”

The Gadshill, ON native missed part of last season due to injury, however managed to still lead the Huron Perth Lakers Minor Midget AAA team in points with 34 points in 26 games. He also scored 7 goals and added 17 assists in 9 playoff games to help lead the Lakers to AHMMPL championship.

This marks the second commitment that the Wolves have received this week as it was announced that their 2nd overall selection Owen Lalonde had committed to the club on Monday.

Gilhula will return to the Nickel City when the Wolves open their Main Training camp at the Sudbury Arena on September 1st.

Season tickets are now on sale for the 2016-17 season! Don’t miss a second of the action and guarantee your seat today by calling Miranda at the Wolves’ Summer Office at 705-524-1723 ext. 232 or by email at office@sudburywolves.com.