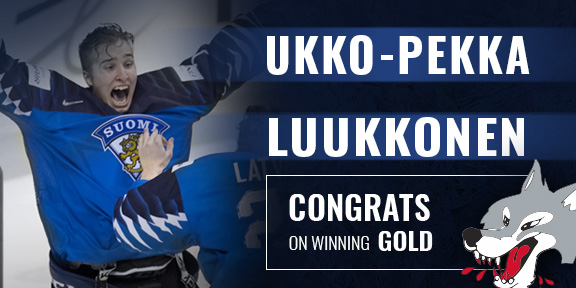 He’s a world champion, but all he wants is an authentic sauna. “Proper saunas is what I miss. It’s one of those Finnish things you kind of have here, but it’s not the same,” lamented Wolves goaltender Ukko-Pekka Luukkonen, who recently returned to Sudbury after backstopping Finland to gold at the World Juniors.

Luukkonen has been making storylines all season long with his brilliant play in net, however, you could tell he is still not quite comfortable with all the media attention. When he first greeted the crowd of reporters and writers who had gathered at the Sudbury Community Arena on Wednesday morning, he had to be coaxed into wearing his sterling gold medal. After it became clear that the room wanted him to sport it, the humble Finlander reluctantly draped the gold medal around his neck, finally ready to field questions from the eager press corps.

Prior to departing for tournament, Luukkonen boasted a record of 19-5-1 with the Wolves, along with an impressive .923 save percentage. The Finnish netminder attributed his success at the World Juniors to the first part of the season in Sudbury. “I think the amount of games I got here before tournament really made a difference. We just have a really good team here and really good teammates, so it just builds up your confidence for the tournament,” he noted. Luukkonen also credits playing in Sudbury with his growth as a person. “Coming to a new environment to play your first season in North America was new for me, but it just helps build up your character. You have to grow up a little as a person, not just in hockey, but taking care of yourself and I think I have taken some big steps this season,” he added.

During the course of the tournament, Luukkonen added to the highlight reel that he had already been building in Sudbury. Upon reflection, the save that stood out to him most was his pivotal overtime stop against Maxime Comtois in the quarterfinals. With the game tied 1-1 in the extra frame, Team Canada was awarded a penalty shot and head coach Tim Hunter elected Comtois as the shooter. Comtois attempted to score low blocker, but Luukkonen handily made the save. “I know you guys all don’t like it, but I think that was the biggest one,” Luukkonen laughed as he told reporters. Less than four minutes after Luukkonen’s save, Canada had another golden opportunity to end the game. Following a beautiful cross-ice pass by Cody Glass, Noah Dobson had a wide open net opportunity, but his stick shattered on the attempt and Finland went back the other way to close the contest. “I’m really happy the stick broke,” Luukkonen joked.

A few days later, Luukkonen and Finland defeated the United States to win the country’s third gold medal at the World Juniors since 2014. When the clock expired, Luukkonen ripped off his mask and jubilantly jumped into the air before he was mobbed by teammates. He wasn’t alone in his celebrations. “I know the whole country was celebrating. I know there was a big thing in my hometown too. It was great to see that,” he said. When asked about whether Finland’s victory was bigger than Tangomarkkinat, the world’s oldest tango festival, held every July in Seinäjoki, Finland, Luukkonen chuckled and said, “I hope it was our win.”

Now back in Sudbury, Luukkonen is just the fourth Wolves player in the last two decades to strike gold at the World Juniors. He joins Johan Mattsson, Marc Staal, and Benoit Pouliot as the club’s previous winners over the last 20 years. In addition to his new hardware, Luukkonen was also named a tournament All-Star by the media. Although the accolades are great, Luukkonen just hopes to build on his experience in Vancouver to help his team through the rest of the season. “I think you have to be ready for every game and if you lose one game it doesn’t mean anything, you just have to be ready for the next game. I think that’s what we did well as a team in the tournament and I think it’s something that I have to bring here to Sudbury too,” he reflected.

Luukkonen’s play this season and recent performance at the World Juniors has certainly caught the eye of the Buffalo Sabres, the NHL team that selected him in the second round in the 2017 NHL Entry Draft. Not long after securing gold for Finland, Sabres GM Jason Botterill said that he anticipates Luukkonen will turn pro for the organization next season. That vote of confidence means a lot to Luukkonen, who said “it just feels good that they’re showing some confidence about me. I think this year has built up my confidence. I’ve been working hard to be ready to turn pro next year.”

It’s clear that Luukkonen has a future with the Sabres, but in the meantime, there’s still plenty of work to be done with the Wolves. With 29 games remaining on the campaign, Luukkonen will look to continue his stellar play in between the pipes, as the team continues to make its push for the playoffs.

When he returns to the Sudbury crease tonight, Luukkonen will not only have the support of his teammates, he’ll also be backed by the city’s Finnish community. “It is awesome to see that there’s support here and that there’s a Finnish community here. I have been visiting the Finlandia home, which is just awesome. It means a lot to me to see there’s Finnish people here and how good their support is,” he stated.

Luukkonen will certainly have the full support of the Finnish community for the Wolves’ matchup against the Niagara IceDogs on February 10th. Finlandia Village has invited all Sudbury Finns, friends and relatives to attend the game, dressed in blue and white to show their support for Luukkonen and his accomplishment at the World Juniors.

Ukko-Pekka Luukkonen will make his return to the Sudbury crease tonight when the Wolves host the Steelheads at 7:05pm. The first 2,500 fans will receive a commemorative Luukkonen Team Finland photo. Just prior to puck drop, the Wolves will hold a special pre-game ceremony to celebrate Ukko-Pekka’s golden performance.