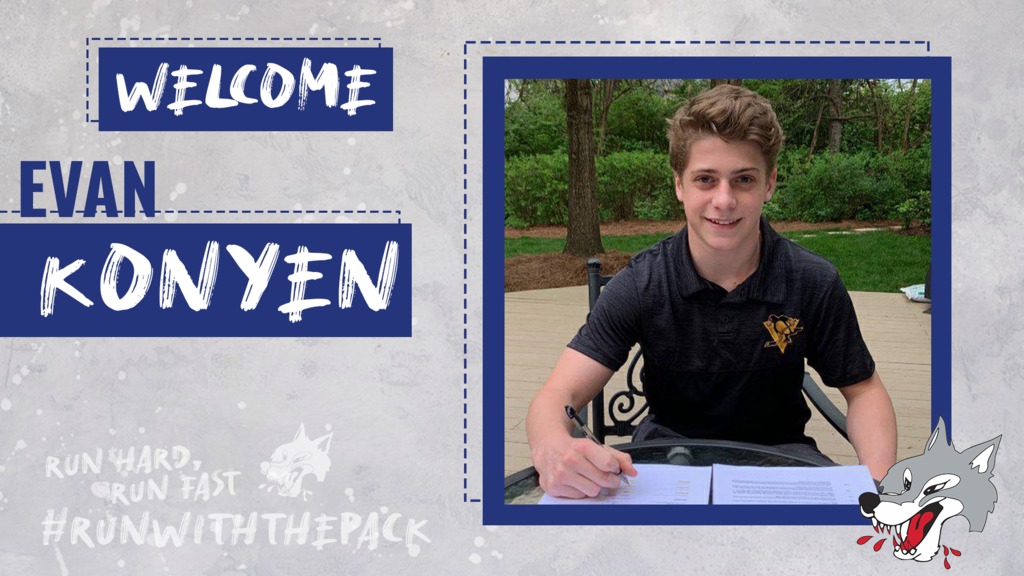 (Greater Sudbury, ON) The Sudbury Wolves are pleased to announce that their 2020 fourth round draft pick in the OHL Priority Selection, Evan Konyen, has committed to the hockey club.

“We felt that we had a steal with Evan at the draft being able to get him where we did,” said Sudbury Wolves VP & General Manager Rob Papineau. “We are thrilled that he has made a commitment to the organization and the OHL.  He is a very talented player and a great finisher with a real nose for the net.  He adds a natural goal scoring ability on the right side, and we felt he was one of the top American players available in the draft that we are very excited to have join our team.”

“I am super excited to sign with the Sudbury Wolves,” said Konyen. “I can’t wait to get up to Sudbury and to get the season started. I am looking forward to meeting my new teammates and to work with them to bring the Memorial Cup to Sudbury.”

Konyen, 16, played last season for the Pittsburgh Penguins Elite U15 team, notching 36 goals and adding 27 assists for 63 points in 55 games. The 5’10”, 160lbs right-winger is a native of Mars, Pennsylvania but holds dual citizenship with Canada and the United States.

Konyen is the third player that was announced as having committed to the Wolves organization in the past three days after 1st round pick David Goyette and 2nd round pick Kocha Delic announced their commitments earlier this week.

“When Dario bought the team, we set out to become a preferred place to play. Being able to sign our first three picks this week, two of which played in the U.S. last season is a very strong indication that we are on the right path,” added Papineau.

Evan Konyen along with Goyette and Delic will all get their first taste of action this fall at the Wolves Main Training Camp. Details are still to be determined.

Get ready to #RunWithThePack! Fans can secure their season ticket seats for the 2020-2021 season online at at https://swse.ca/product/2020-21-sudbury-wolves-season-tickets-early-renewal/  or by emailing office@sudburywolves.com. Early cash savings are in effect until May 1st.