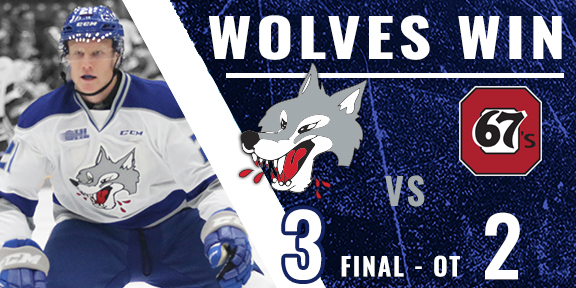 The Sudbury Wolves were hungry for a win Thursday night as they faced-off against the high-flying Ottawa 67’s at the Elgin Street barn. David Levin was the overtime hero and first star of the game as he scored with just over a minute remaining in the extra frame to claim a 3-2 overtime win over the top team in the league. Shots on goal were 27-26 in favour of Ottawa. It was also a big night for Ukko-Pekka Luukkonen and Nolan Hutcheson who earned the second star and third star of the game respectively.

The Wolves got a quick head start on the 67’s when Nolan Hutcheson scored his first of two goals on the night to put the pack on the board just under two minutes into the first period. At the halfway mark, the 67’s tied the game at one with a goal from the league’s point leader, Tye Felhaber.

The offensive line of Blake Murray, Nolan Hutcheson, and Quinton Byfield impressed the crowd as they kept the game alive by giving the Wolves an upper hand on the 67’s. Hutcheson scored his second goal of the game to give the Wolves a 2-1 lead four minutes into the second. Byfield earned the assist on the play. With both teams playing a fairly physical game, Darian Pilon pumped up the Wolves bench by dropping the gloves with Hudson Wilson. With just over five minutes remaining in the period, Lucas Peric was able to tap in a goal cut the Wolves lead and tie the game at two.

It was a goalless third period as the 67’s and Wolves battled hard for the win, however, the Wolves came out on top in overtime as David Levin scored the game winner to take home the 2 points. Cole Candella and Luukkonen both earned the assists.

The boys are back in action tomorrow as they make their way down highway 17 to face-off against Central division rivals the North Bay Battalion at 7:00pm. Sunday the pack will get set to hit the road to Mississauga where they will take on the Steelheads at 2:00pm. Fans can follow the Wolves on the road by tuning into the live play-by-play on CKLU 96.7 or by streaming it live on mixlr.com/sudburywolves. Friday’s game is also available on Eastlink Channel 10 and 610 HD.