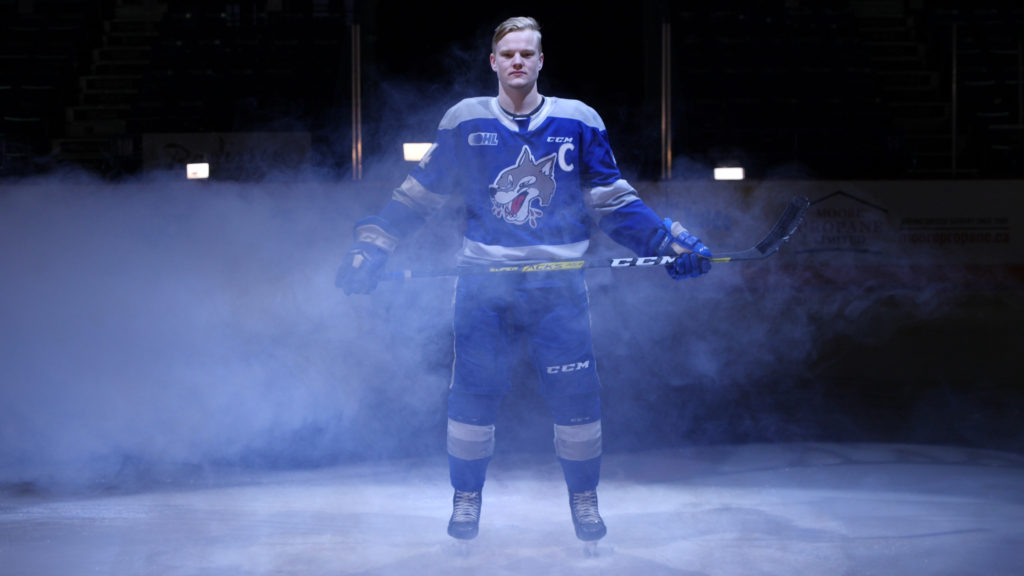 ke my way through the Sudbury Arena, I notice that the overhead lights are off except for a lone spotlight shining down onto centre ice. The Wolves have just finished practice and some members of the team are now in full uniform, getting ready to shoot promotional footage with the club’s videography crew beneath the bright lights.

Once I arrive at ice level, I notice that team captain, Macauley Carson, is one of the first players out there. I’m a few minutes early for our interview, so I busy myself by scrolling through my phone while Carson takes direction from the lead in-game producer, Paul Hamilton, who is behind the camer a.

While Carson hits his marks, I can’t help but smile at the thought that I’m here to speak to a “team-first” player, who has eschewed the limelight throughout his career with the club, about an individual accomplishment, and, here he is, literally, under a spotlight.

As he skates off the ice and towards me rather than returning to the bench, his teammates give him a hard time but he just shrugs it off and barks that he’s got to talk. He already knows what is on the agenda for our interview. This Thursday, Carson will be playing in his 302nd career game with the Wolves, eclipsing the mark set by Jamie Matthews in 1994, to establish a new franchise record for most all-time games played.

“Don’t know if that means I’m just getting old or if it’s a nice thing,” Carson laughs. 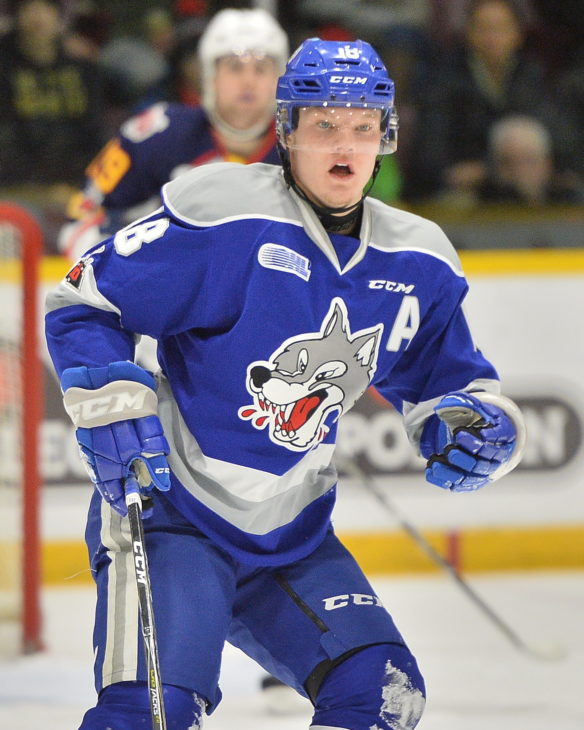 Drafted 41st overall by the Wolves in the OHL Priority Selection in 2015, Carson admits he never expected to reach the milestone. While he has been focused on the team’s play down the stretch, now that he is zeroing in on club history, he can’t help but get caught up in the moment.

“I didn’t think too much of the record leading up to it,” he says. “We’re in a bit of a hunt, so you’re not thinking of that too much. I know last year it kind of popped into my mind that I might be able to break it.” 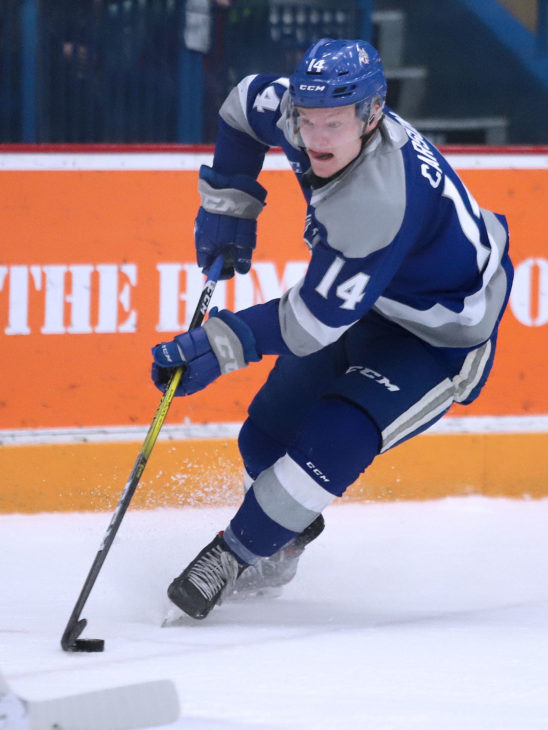 e played his 300th career game, a mark that few OHL players reach, especially with one team, that’s when it hit him.

“They gave me an ovation in my 300th game, that was special to have the support of the community like that,” he says. “The franchise has been here since ’72 and that record has been standing for 26 years. It’s nice to have one record before my time is done here, and it’s a pretty special one for me, too.”

Over the course of his tenure with team, the hard-nosed winger has endeared himself to the fans and his teammates with his strong play on both sides of the puck. Although he’s a former 30-goal scorer, Carson is just as likely to mix it up with opponents or sacrifice his body to block a shot as he is to find the back of the net.

Although Carson has stuck around as long as he has because of his play, he is quick to credit his billet family, the Vehkalas, for his longevity with the Wolves.

“I think it starts with my billets,” he says. “If I didn’t have such a great home and second family away from my family in Barrie, I don’t think I’d be here for as long as I have been.” 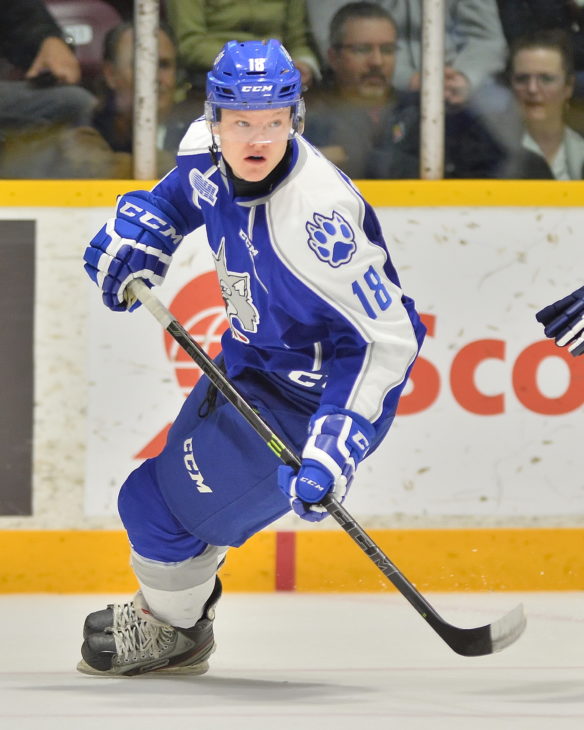 Fittingly, Carson will make Wolves history in front of his family on Thursday when the Wolves take on the Colts in Barrie. Whenever the Midhurst, Ontario native plays in Barrie it always feels like a hometown crowd, but it will be even more special this time when he skates out onto the ice for his 302nd career game.

“I’m really just happy that family and friends and the people who have mentored me, whether through minor hockey or parents’ friends, will be there and it will be cool to share that with them,” he says.

Being able to set the record in front of his family is just one of those inexplicable scheduling quirks where the stars simply align.

Had it not been for a wrist injury in his third campaign, in which he missed 20 games, Carson would have likely set the record earlier this season and the record-setting moment likely wouldn’t have happened in Barrie.

“It kind of worked out pretty perfectly,” he says.

Carson doesn’t know if his family and friends will have signs in the stands for him on Thursday night, but he knows for sure there will be at least a couple of them in the crowd on Friday when the team returns home.

“I know my billet mom [Stacey Vehkala] has a sign ready for Friday in Sudbury,” he says. The veteran winger says she has alrea 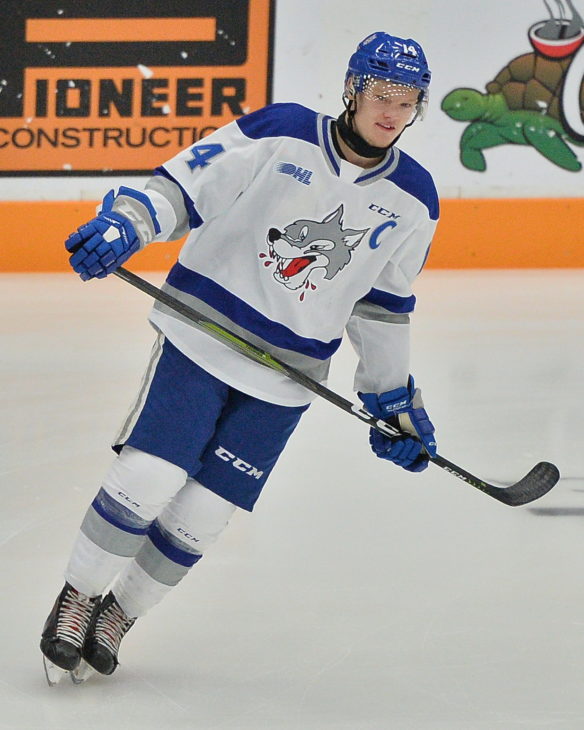 dy showed him some of her proposed layouts and he has signed off on the designs. “They’re all good,” he laughs. “I just hope it’s not too embarrassing, but it’s pretty fun.”

Time will only tell how long Carson’s record will last. Matthews’s record stood for more than a quarter of a century before it was broken. When I tell Carson that Matthews, who I spoke to earlier in the week, couldn’t be happier for him, his face lit up. He only hopes that one day he will get a similar telephone call.

“Being on the other end of a call like that would be pretty special,” he says. “I hope someone beats it someday.”