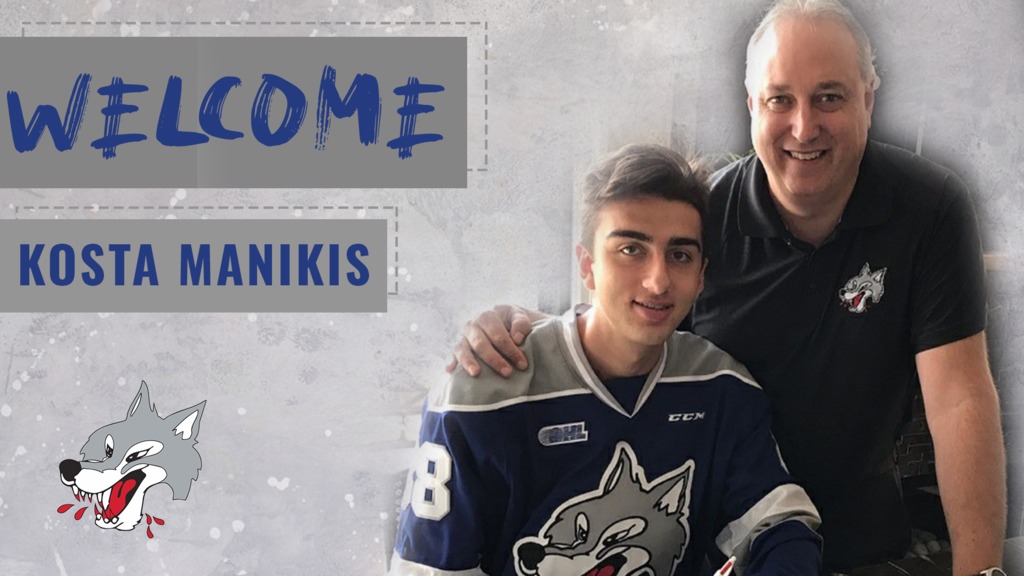 (Greater Sudbury, ON) The Sudbury Wolves are pleased to announce that forward Kosta Manikis has committed to the hockey club. The Richmond Hill native was selected by the Wolves in the 5th round of the 2017 OHL Priority Selection. The 6’2, 182 lbs. forward split his time last season between the Stouffville Spirit and the Toronto Jr. Canadiens of the OJHL.

“We are extremely happy that Kosta has decided to come to the OHL and the Sudbury Wolves,” said Sudbury Wolves VP Hockey Operations and General Manager Rob Papineau. “Our scouting staff has always been very high on Kosta since his draft year when he was a difference maker for his Vaughn Kings team that entire season.  We have followed Kosta very closely over the past two seasons in the OJHL where he has been very successful.  He is a very intelligent player who has great vision and playmaking abilities.  He is a big skilled forward who makes plays and does not have any panic in his game.  He has a very clear goal of playing in the NHL and is very excited about coming to Sudbury to play for our team while working towards his goal.”

“I am thrilled to announce my commitment today to the Sudbury Wolves,” said Manikis. “It is a team that has a great group of players who I am excited to meet and play with. Sudbury has a great hockey tradition and rich history and I feel this is the best place for me to improve my development and to help the team win a Memorial Cup. The opportunity to play for the Sudbury Wolves and Coach Stillman is a great opportunity for me to really take my game to the next level,” he added.

Prior to being moved to Toronto at the OJHL Trade deadline last season, Manikis tallied 15 goals and 36 points. With the Jr. Canadiens, Manikis added to that total and put up 11 points in 11 games and finished the 2018-19 season with 47 points.  Manikis was one of 12 OJHL players who played in the 2019 Canadian Junior Hockey League Prospects Game Jan. 22 in Okotoks, Alta. He was named an OJHL First-Team All Prospect and was ranked 170th among North American skaters in NHL Central Scouting’s final rankings. Kosta was committed to join Clarkson University in 2020-21 of the NCAA prior to his commitment to the Wolves.

Fans will be able to see Manikis in action beginning August 28th when training camp opens.

It’s time to run with the pack! Season tickets are on-sale now at sudburywolves.com!