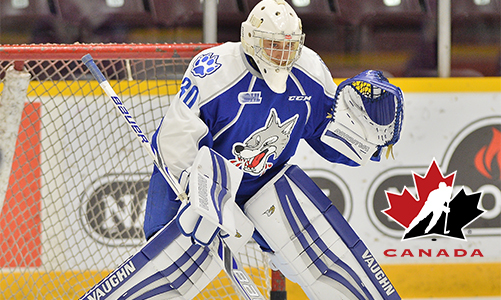 Hockey Canada announced Wednesday that Sudbury Wolves goaltender Jake McGrath has been named to Team Canada’s roster for the U18 tournament. Jake will join his teammates in Etobicoke ON this week before departing to Slovakia for two pre-competition games in preparation for the 2017 IIHF U18 World Championship, April 13-23, in Poprad and Spisska Nova Ves, Slovakia.

The Sudbury Wolves are pleased to see the recognition of all the hard work that the 1st year goaltender put in this season.  Jake raised his game for the Wolves this season in his rookie year while 19 year old goalie Zack Bowman missed half the season due to injury. In 45 games McGrath, the Mississauga native, had a record of 17 wins, 18 losses and 6 overtime losses. He also held a Goals Against Average (GAA) of 3.77 and a save Percentage of 0.896.

“I am so honoured to be chosen to play for Canada,” said McGrath, “I am eager to meet the players and coaches and can’t wait to get started. This is a dream come true and I am looking forward to pulling on the Canadian Jersey to represent our country.”

Canada opens the 2017 IIHF U18 World Championship on April 13 against Latvia; it will also play Finland, Slovakia and Switzerland in preliminary-round action. TSN, the official broadcast partner of Hockey Canada, is broadcasting 12 games , including all of Team Canada’s match-ups at the IIHF U18 World Championship. RDS will broadcast 10 games, including Canada’s four preliminary-round games, two quarter-final games, both semifinals, and the bronze- and gold-medal games.

The Sudbury Wolves would like to congratulate Jake on this opportunity and wish him and his teammates the best of luck at the tournament representing Canada.