OHL Takeaways from the 2020 NHL Draft 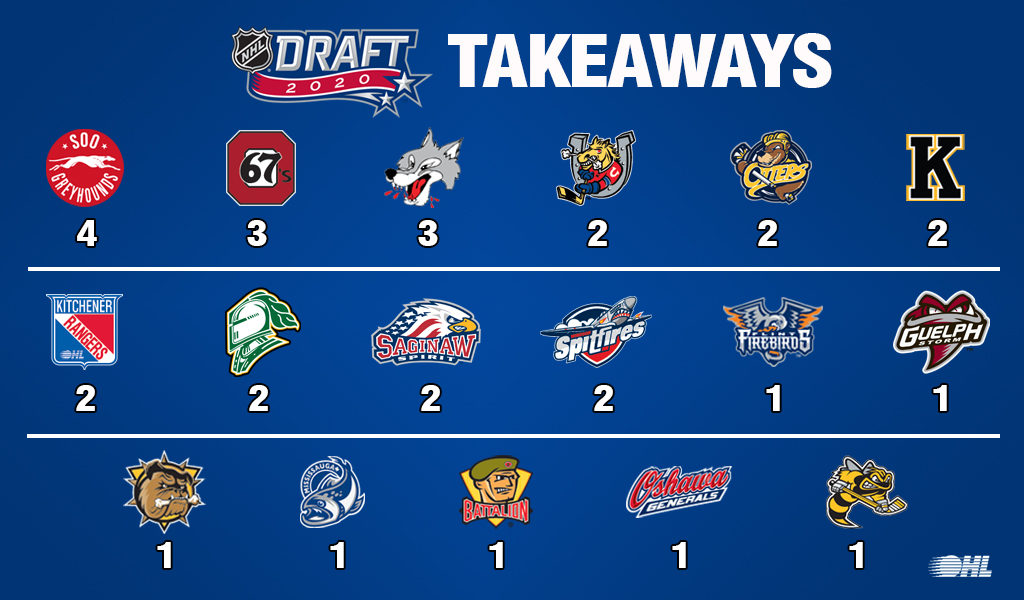 The OHL was well represented at the 2020 NHL Draft with a total of 31 selections from 17 of the League’s member teams and a number of interesting storylines along the way.

OHL talent makes a big splash
Seven OHL players were selected within the first round with five going in the top 10, the League’s most since 2010.

Drysdale becomes highest selected Otters defenceman in NHL Draft history
Jamie Drysdale also made history within the Erie Otters franchise, becoming its highest drafted defender in NHL Draft history. Prior to the 18-year-old blue liner going 6th overall to the Anaheim Ducks with the highest pick the team has had since 2012, former Otters defender Carlo Colaiacovo was picked up 17th overall by the Toronto Maple Leafs in 2001.

Greyhounds make biggest impression since 2015
The Soo Greyhounds developed four drafted players in Ryan O’Rourke, Jaromir Pytlik, Tanner Dickinson and Rory Kerins, their largest crop since 2015. The Hounds have had an impressive run at the Kubota CHL/NHL Top Prospects Game, sending at least one representative 11 years in a row as O’Rourke and Pytlik suited up this past January in Hamilton.

Five players become first of their OHL teams to join respective NHL clubs
A number of draft selections also became the first members of their OHL team to be selected by their respective NHL clubs. Tyson Foerster, drafted 23rd overall, became the first Barrie Colt to be taken by the Philadelphia Flyers, while 27th overall selection Jacob Perreault has made his mark as the first member of the Sarnia Sting to be drafted to the Anaheim Ducks. London’s Luke Evangelista, drafted 42nd overall, is the first Knight to ever be taken by the Nashville Predators while Jan Mysak became the Montreal Canadiens’ first draft pick out of the Hamilton Bulldogs program, though they’ve drawn from the OHA’s Hamilton Red Wings in the past. Final selection Declan McDonnell made the same mark with the Tampa Bay Lightning as their first pick chosen from the Kitchener Rangers organization.

Quinn, Rossi become third pair of 67’s teammates taken in the top 10
Ottawa 67’s teammates Jack Quinn and Marco Rossi were drafted simultaneously at 8th and 9th to the Buffalo Sabres and Minnesota Wild, respectively. In doing so, they became the third pair of Barber Pole teammates to be chosen among the top 10, following in the footsteps of Michel Larocque (Montreal Canadiens, 6th) and Wayne Merrick (St. Louis Blues, 9th) in 1972 as well as Bobby Smith (Minnesota North Stars, 1st) and Tim Higgins (Chicago Blackhawks, 10th) in 1978.