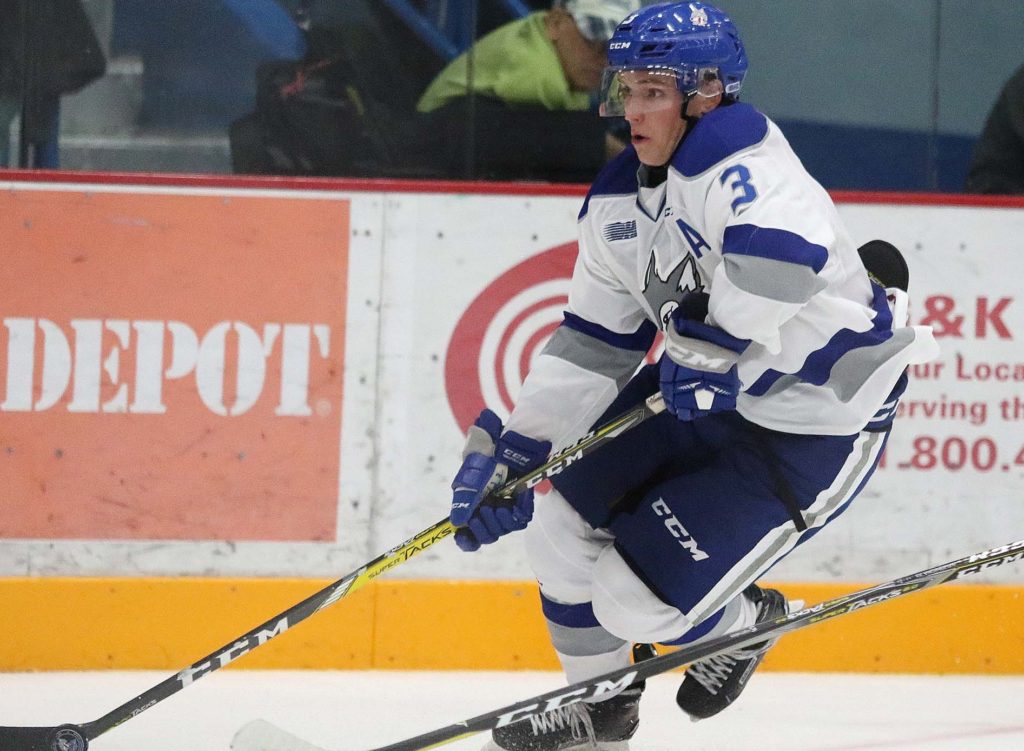 After Friday night’s big win, the Wolves couldn’t quite carry the momentum into Saturday afternoon’s rare 4:05pm road game against the Peterborough Petes. The Wolves fell by a 6-3 final with goals coming from Kyle Rhodes and Dmitry Sokolov.

Kyle Rhodes played a great game for the Sudbury Wolves scoring twice to increase his goals on the season to four. His play earned him the third star of the night.

The Petes however opened the scoring 10 minutes in when Matyas Svoboda beat Marshall Frappier off a rebound to give the Petes the 1-0 lead. Three minutes later, Logan DeNoble scored just as a power play ended to give the Petes a two-goal lead. With 3:38 seconds remaining in the third, Kyle Rhodes scored his first goal of the night to beat Dylan Wells and cut the Petes lead to 2-1.

A great play from Rhodes at the start of the second period had him tap in a rebound to tie the game at two just 3:33 into the frame. With the game tied up at two, the Wolves ran into penalty trouble during the second that kept the Wolves special teams busy and allowed the Petes to gain momentum. Nick Robertson capitalized on one of the power plays to give the Petes the lead once again. As the period wound down, Pavel Gogolev slipped one past Frappier with 28.5 seconds left to allow the Petes to enter the dressing room up by two.

The Petes added two more goals during the third period to pull away from the Wolves with goals coming from Nikita Korostelev and Alex Black. As the Wolves pushed to tie the game, Dmitry Sokolov scored his fourth goal in two games off a rebound from Cole Candella. It wasn’t quite enough as the Petes took a 6-3 victory and led in final shots on goal 48-25.

The Wolves will have 24 hours to rebound as they get set to take on the Oshawa Generals at the Tribute Communities Centre Sunday evening at 6:05 pm. Fans can follow the action by listening to the live play by play on the radio at 96.7 CKLU or mixlr.com/sudburywolves on the Sudbury Wolves App.  In addition to listening to the game, fans can tune into Eastlink TV Channel 10 or 610 to watch the broadcast.

And don’t forget, Wednesday is Student Night when the Sault Ste. Marie Greyhounds come to town for Game 2 of the Bell Challenge Cup!  Fans can now purchase their tickets online or at the Sudbury Arena Box Office. Post-secondary students will be able to purchase a ticket, popcorn, and pop for $17 or a ticket, popcorn, and pop for $20. The offer is available online in advance at https://sudburywolvestickets.com/product/student-night-offer/. Deadline to purchase is Tuesday at midnight.