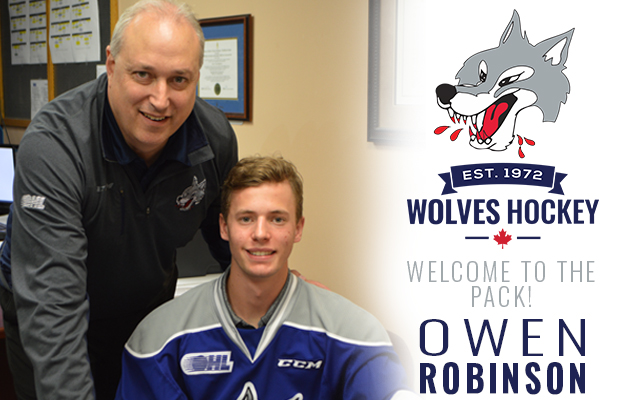 The Sudbury Wolves are pleased to announce that 18-year-old left-winger, Owen Robinson has committed to the hockey club. Robinson is a native of Orangeville, ON who played 51 games with the Blind River Beavers of the NOJHL last season where he notched 22 goals and 34 assists for 56 points. Robinson was selected by the Wolves this past season in the 10th round of the 2018 Priority Selection.

“Owen had an outstanding rookie season with Blind River last year where he jumped onto everyone’s radar,” said Rob Papineau, VP Hockey Operations & General Manager. “He combines skill and speed with the finesse and scoring ability needed to succeed at this level. Owen is a great example for all young hockey players in maintaining your focus to obtain your goals of playing in the OHL,” he added.

“I am very excited to have the chance to play with the Wolves, and can’t wait to get started,” said Owen following today’s final Blue & White game.

Owen is one of three players who committed to the team following Thursday’s Blue & White game.

The Wolves will now hit the ice against the Ottawa 67’s on home ice Friday night, August 31st during Ribfest. For more information on tomorrow’s exhibition game, visit: http://sudburywolves.com/article/wolves-host-67s-friday-in-pre-season-action