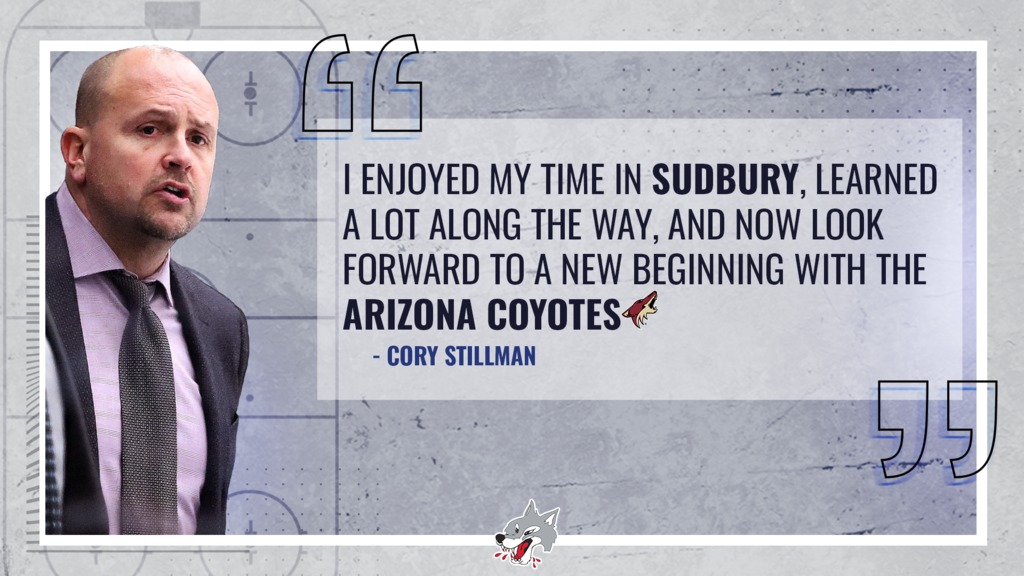 (Greater Sudbury, ON) The Sudbury Wolves, in conjunction with the Arizona Coyotes, announce that Head Coach Cory Stillman has been named an Assistant Coach with the NHL club.

“We would like to thank Cory for this dedication, passion and commitment to the Sudbury Wolves,” said Wolves Vice President and General Manager Rob Papineau. “Cory and our entire coaching staff have always believed in our vision and our values as an organization.  We believed when we hired him that he would come here and help build the culture that our program wanted to establish in the new era. Cory knows what it takes to be a professional and he was able to instill that in our dressing room with our players.  Our players learned under Cory what it meant to work hard and compete hard in practice and games.”

Stillman coached the Wolves for the past three seasons, from 2017 to 2020 before the most recent season was cut short due to the pandemic.  The Wolves provided Cory his first opportunity to be a head coach as he came to Sudbury from the Carolina Hurricanes where he served as the Director of Player Development for 5 seasons.  With his players, he was fully committed to sharing his knowledge he picked up as both a two-time Stanley Cup champion and as a teacher in his role in Player Development.  During his time in Sudbury, Stillman had a record of 199 Games coached, accumulating a record of 94 wins, 89 losses and 16 overtime losses for a 0.512 winning percentage.  In the 2018-19 season, the team reached the second round of the playoffs and had an exceptional regular season record of 43-20-3-2 backstopped by the OHL’s Red Tilson MVP trophy winner Ukko-Pekka Luukkonen and the arrival of that season’s OHL Emms Family Award Rookie of the Year and future NHL 2nd overall selection, Quinton Byfield.  Those 43 victories were the most since the 1994-95 season and helped Cory finish as a finalist for the Matt Leyden Trophy as Coach of the Year.  This past season, Cory led the Wolves to the Emms Trophy as Central Division Champion for the first time since 2001.

“I want thank Dario Zulich, Scott Lund, Rob Papineau, and Ken MacKenzie for giving me an opportunity to start my professional coaching career in Sudbury,” said Stillman. “My first year in Sudbury, we were able to accomplish a lot of things both on and off the ice that created a culture within the Sudbury Wolves hockey team that I am very proud of.  As a staff we were able to build off that first year and improve as a club every year.  I want to thank Darryl Moxam, Jordan Smith, Bud Stefanski, Zack Stortini, and Dan Buckland for their dedication and commitment to me, and to the players that they worked with every day during the season.  The Sudbury Wolves have a great program in the OHL and are a great place for both players and coaches to develop.  I enjoyed my time in Sudbury, learned a lot along the way, and now look forward to a new beginning with the Arizona Coyotes,” he added.

“We wish Cory and his wife Mara all the best in Arizona and we know he will continue to succeed in his coaching career. While we were hoping to start out the season with him as our head coach, we also knew when we brought him to Sudbury that he was someone the NHL would very likely come looking for again,” added Papineau.

The search for a new head coach now begins as the organization looks to continue to build upon the strong program it has built under the team’s ownership and management.

The OHL continues to plan for a February 4th return to play. Wolves fans can read more about the updated Return to Play plan by visiting, https://sudburywolves.com/article/the-wolves-announce-update-return-to-play-faqs.

Fans can also check out Sudbury Wolves merchandise by visiting the SWSE Official team shop located at the New Sudbury Centre or online at swse.ca/wolves.