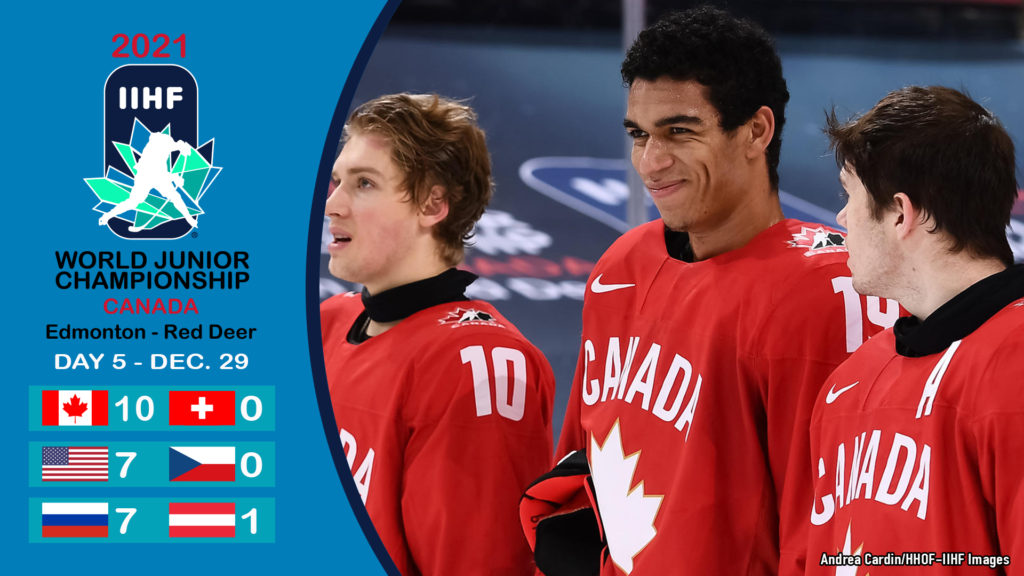 Selected second overall by the Los Angeles Kings in the 2020 NHL Draft, Byfield got the monkey off his back, scoring his first World Juniors goal in his 10th career contest 5:16 into the third period. The Newmarket, Ont. native received Player of the Game honours for Canada in the lopsided win, going 10-for-14 in the faceoff circle while helping his country improve to 3-0.

Oshawa Generals star Philip Tomasino opened the scoring just 1:30 into action, finding the back of the net in a third straight game. Saginaw Spirit teammates Ryan Suzuki and Cole Perfetti would join London Knights sniper Connor McMichael with a goal and an assist each. Ottawa 67’s winger Jack Quinn picked up two assists while Erie Otters pointman Jamie Drysdale had one of his own. In all, OHL players combined for 16 points in the win.

Canada outshot Switzerland 52-15 with Devon Levi locking down the shutout.

Switzerland featured one OHL player in the lineup on Tuesday as Niagara IceDogs defender Giancarlo Chanton patrolled the blue line. The Swiss fall to 0-3 and will try for their first win on Wednesday against Germany (1-2).

GAME OVER! A 15-save shutout for @DevonLevi33, six points for @byfield55, two goals for @jak_pelletier and a win over ??.

Senna Peeters (Halifax Mooseheads) scored Austria’s first goal of the tournament 7:38 into the second period. Jakob Brandner made 43 saves in the loss as Austria fell to 0-3.

The Russians improve to 2-1 and face Sweden on Wednesday while Austria looks for its first win on New Year’s Eve against the Czech Republic.

The United States improves to 2-1 in the tournament and will complete its preliminary schedule against Sweden (2-0) on New Year’s Eve.

The Czech Republic sits at 1-2 and faces Austria at 2:00pm ET on New Year’s Eve.

A game of penalties and powerplay goals gets @usahockey one step closer to the quarterfinals.