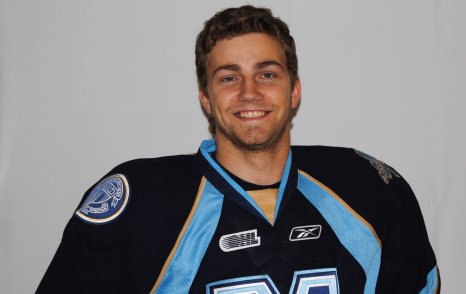 The Sudbury Wolves are pleased to announce the acquisition of 19-year-old forward DEREK SCHOENMAKERS. The big 6’2″, 190 lb forward was acquired from the MISSISSAUGA MAJORS in exchange for 18-year-old centre KRISTOFF KONTOS.

SCHOENMAKERS was a key part of the MISSISSAUGA’S MEMORIAL CUP run last season as the Kitchener native played in 15 OHL play-off games and recorded five points.   He also played in the Memorial Cup Championship hosted by Mississauga in May.

The big forward sits fourth in team scoring on the Majors with 13 goals and 12 assists for 25 points in 37 games.  SCHOENMAKERS has four power play goals this season and leads the Majors in penalty minutes with 61.

“SCHOENMAKERS fills a need for us on the right-side and his Memorial Cup experience also provides us with some valuable leadership” notes Wolves GM Blaine Smith.  “He will make us a more difficult team to play against with his size and grit. He has also developed into a skilled right-winger that places him in our top-five in team scoring.”

Departing the Wolves is Kristoff Kontos who has similar numbers to that of SCHOENMAKERS.  Kontos’ departure alleviates a log-jam at the centre-ice position which includes:  MICHAEL SGARBOSSA, KONTOS, MATHEW CAMPAGNA, GREG JAMBROSICH and JACOB HARRIS.   The Wolves also have MICHAEL MACDONALD and NICK BAPTISTE that can play centre as well.

“This move will provide a greater opportunity for our first-rounder MATHEW CAMPAGNA to play a more prominent offensive role as a top-six forward” notes Smith.  “Mathew is a very skilled centreman that we believe will flourish in the second-half with a more demanding offensive role.”

SCHOENMAKERS also provides the Wolves with another overage candidate for next season. “Derek is a player that could return to the OHL for a fourth and final season next year.   At the present time, we only have one 1992 birthdate forward in our line-up so we will certainly look at welcoming Derek back again next season.”

“I am very excited about coming to Sudbury and joining the Wolves Friday night” notes Schoenmakers.  “They have a very good team and I look forward to helping the Wolves make a successful run in the upcoming play-offs.”

SCHOENMAKERS will make his Wolves debut on Friday night when the Wolves face the number #1 ranked team in the country – the LONDON KNIGHTS.  Game time is 7:30 and there are plenty of seats available at the door.