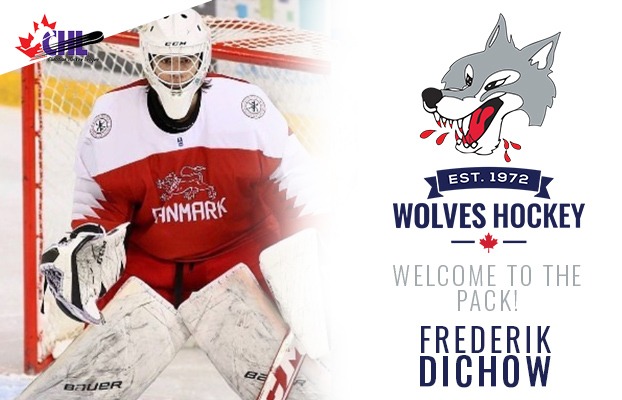 (Greater Sudbury, ON) The Sudbury Wolves selected two players in the CHL Import Draft, which took place earlier today. In the first round, the Wolves were pleased to select 18-year-old goaltender Frederik Dichow and in the second round, 18-year-old defenceman Kalle Loponen.

“Dichow he is a modern-day goaltender with a big frame,” said Sudbury Wolves VP Hockey Operations and General Manager, Rob Papineau. “He was outstanding at the U18 world championship and our European scout was very high on selecting him. We have had positive discussions with the Montreal Canadiens and look forward to the opportunity of continuing these discussions as it as a great place for Frederik to play.”

Dichow is 6’5, 192lb Danish goaltender who played in Denmark last season, splitting time between Vojens Ik, SønderjyskE and the Denmark U18 National team. The Vojens, Denmark native was selected by the Montreal Canadiens in the 5th round of the 2019 NHL Entry Draft, 138th overall.

“Kalle is an excellent puck moving defenceman that makes a great first pass and great decisions. He also has an outstanding shot and is a guy that we feel could really help our hockey club and our power play,” added Papineau.

Loponen is a 5’11”, 187lb right-shot Finnish defenceman who split playing time last season between the Kärpät U20, Hermes and the Finnish U18 National Team. Kalle was selected by the Toronto Maple Leafs in the 7th Round of the 2019 NHL Entry Draft, 204th overall.

“Both of these players have been drafted to the National Hockey League and we look forward to working with their representatives and their NHL Teams with the goal of them playing for Sudbury.”