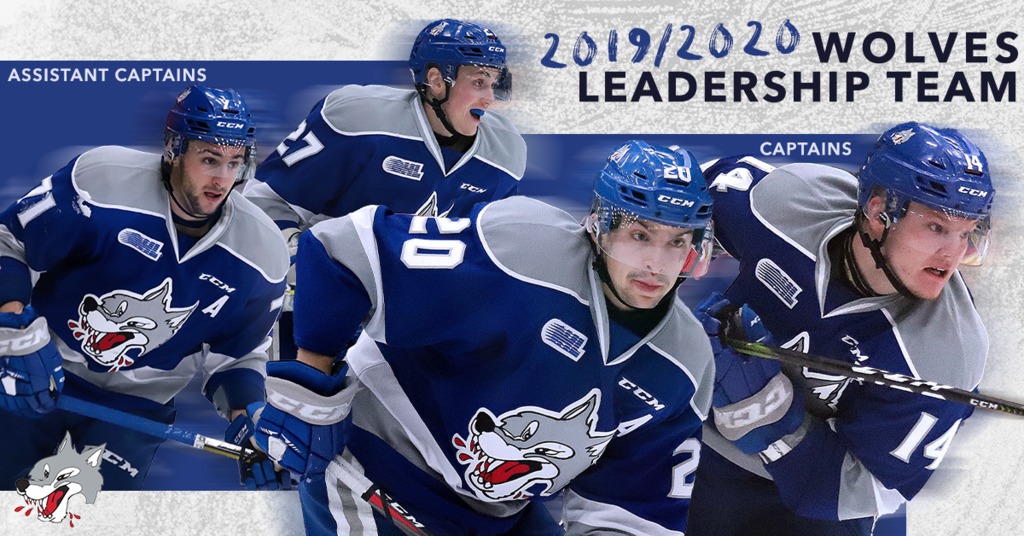 (Greater Sudbury, ON) The Sudbury Wolves were pleased to announce their leadership team for the 2019-20 season at Tuesday night’s pep rally at the New Sudbury Centre. Head Coach Cory Stillman made the announcement that overage forwards Macauley Carson and Shane Bulitka will co-captain the team and David Levin and Emmett Serensits will wear alternates.

“Before starting the season on Thursday, I am happy to name Shane Bulitka and Macauley Carson as co-captains of our team,” said Sudbury Wolves Head Coach Cory Stillman. “Both Shane and Macauley have displayed the leadership we want for our culture as Sudbury Wolves.”

“I am honoured to be named Captain alongside Macauley,” said Bulitka. “I am very excited for the opportunity to help lead the team and am looking forward to getting the season started.”

“It’s going to be a special season being able to share the captaincy with a guy I came into the league with 5 years ago,” said Carson. “I am proud to be a leader for a team that I think has all the tools to make it very far this year.”

The Wolves have a strong trio of overage forwards that the young players will be able to look up to. All four players named to the leadership group are hardworking and lead by example. Both Carson and Bulitka are entering their fifth and final year in the OHL and each will be looking for a big season, after almost doubling their point production last season from the year prior.  Levin is also entering his fifth season and is coming off his best offensive production at a point per game in 2018-2019.  Serensits has continued to impress with his effort and commitment on and off the ice since the day he arrived after being the Wolves’ first ever U18 selection in the 2017 OHL U18 draft.

The Wolves will open the 2019-20 regular season on Thursday when they travel to St. Catharines to face-off against the Niagara IceDogs. They will also make stops in Erie on Friday and Mississauga on Sunday before returning home for the 2019-20 home opener on Friday September 27th against the North Bay Battalions. Follow the Wolves on the road by tuning into CKLU 96.7 and mixlr.com/sudburywolves.