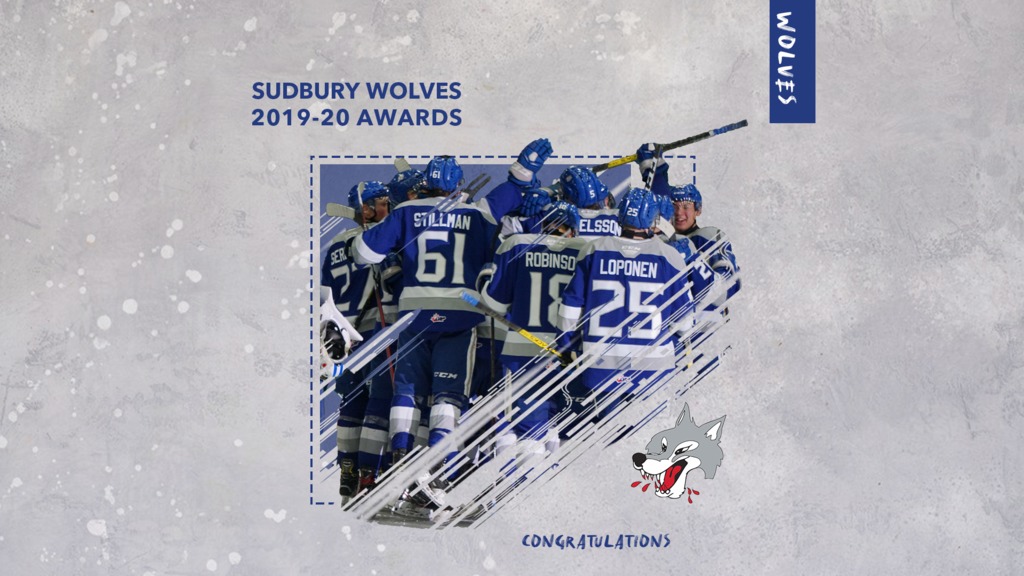 (Greater Sudbury, ON) As the 2019-20 season came to an unexpected, but important ending last week in the first against COVID-19, the Sudbury Wolves are pleased to announce their 2019-20 season award winners.

The Wolves finished the 2019-20 campaign with a record of 34-27-1-1 through 63 games, with 5 games remaining before they were cancelled. The season was highlighted by Captain Macauley Carson setting the new record for most games played in a Wolves uniform with 304, while teammates, David Levin (8th) and Shane Bulitka (25th) achieved top 25 finishes with 259 and 235 games respectively. A number of Wolves players also had OHL career best years including all three overage players, Carson, Levin and Sudbury native, Brad Chenier, as well as Carolina Hurricanes prospect Blake Murray, among many others.

As a team, the Wolves scored the highest goal total in 21 years, and received their first division crown since the 2000-01 season, which is planned to be celebrated in September. This season also marked the first time that the team had over 30 wins in back to back season since the 2004-05 and 2005-06 seasons.

“Although it was not how we expected the season to end, our players worked extremely hard during the season on and off the ice and we wanted to recognize them for their efforts,” said Sudbury Wolves VP Hockey Operations and General Manager Rob Papineau. “We are very proud of this group as well as our fans and sponsors and we wanted recognize and thank them for their patience and understanding during this unprecedented time. We are planning to be back, stronger than ever this fall, and we look forward to everyone joining us as we celebrate our Division Title.”

The Sudbury Wolves would like to congratulate all of our players on a fantastic season as well as thank our fans and sponsors for their tremendous support!

The Wolves will now shift their attention to the 2020 OHL Priority Selection set to take place on April 4th beginning at 9:00am. Fans can follow along online at sudburywolves.com or on Facebook, Twitter and Instagram.

Season Ticket Holders are also reminded that the Early Pricing Deadline is May 1st. Fans who purchase their season tickets for next season by May 1st will save $50 per season.  The Wolves Office remains closed at this time, but are available or by emailing office@sudburywolves.com. Season Tickets can also be purchased online at https://swse.ca/product/2020-21-sudbury-wolves-season-tickets-early-renewal/

Top Plus Minus Player – Quinton Byfield