Wolves’ Byfield Leads the Way for OHL at 2020 NHL Draft 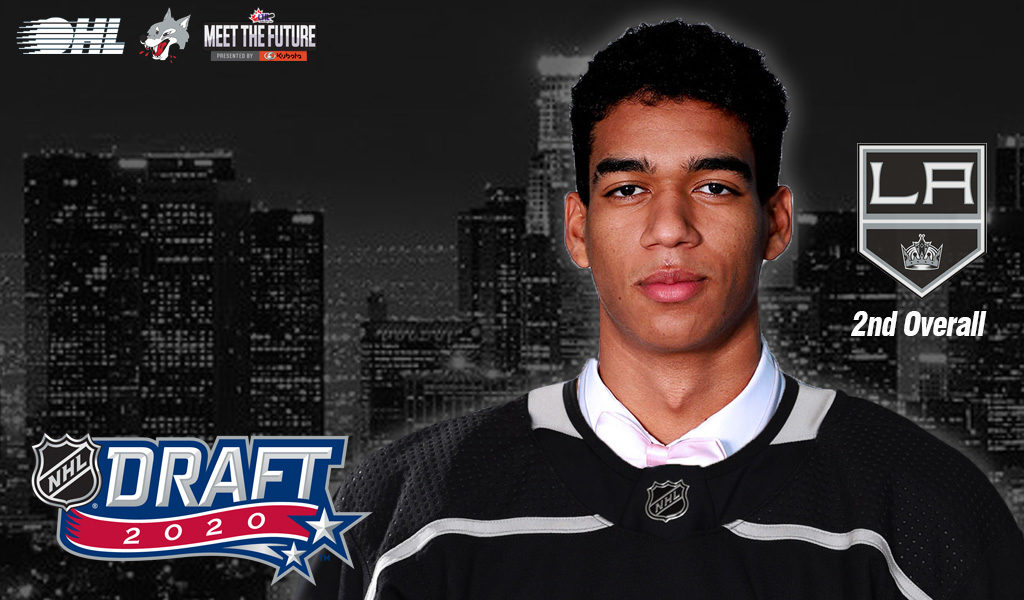 Sudbury Wolves centreman Quinton Byfield led the way for the Ontario Hockey League in the 2020 NHL Draft, being selected second overall by the Los Angeles Kings.

Byfield, who competed in the 2020 Kubota CHL/NHL Top Prospects Game, finished his second OHL season with 82 points (32-50–82) in 45 games and won a World Junior gold medal as part of Canada’s National Junior Team.

He was among close family when Kings GM Rob Blake announced his name.

History has been MADE ? Quinton Byfield becomes the highest-ever drafted Black Player in the @NHL history.

“It was definitely super crazy. Being able to spend that with my family, the people that supported me growing up, is really exciting,” he said upon being drafted with his family by his side. “Hearing my name get called was definitely a big relief off my shoulders. I can’t wait to go to L.A. now.”

The 18-year-old Newmarket, Ont. native is now the highest-selected Black player in NHL Draft history, a moment he described as “super positive.”

“I just want to continue to spread positive awareness to that subject,” he continued. “It’s just an exciting moment for me and so I’m just really happy about it all coming together.”

A self-described speedy centre who can use his size, skill and strength to his advantage, Byfield acknowledged the challenge that comes with making the jump from the OHL but expressed confidence in his ability to step into an NHL role next season.

“I have a lot of confidence in myself. I definitely think I can step into the NHL next year, but I know it’s a really big jump from the OHL,” he answered. “You’re playing against the best guys every night and playing with them so it’s definitely going to be challenging but I’ve worked my whole offseason.”

Byfield is also now the Wolves’ highest drafted player in franchise history, beating out Mike Foligno who was drafted third overall in 1979. He credited Wolves head coach and former NHLer Cory Stillman with helping him through the draft process.

“Whatever knowledge he gave me I definitely took to heart and really tried to put that into my game,” he said. “Before coming to the OHL, I don’t think I was ever in my D zone, and then coming in, he definitely helped me work in the D zone and penalty kill and all that, so he’s really translated my game and really helped me.”

How it started How it’s going pic.twitter.com/ptyfsJrsmM