Wolves Come From Behind to Saddle Up Win Over Colts 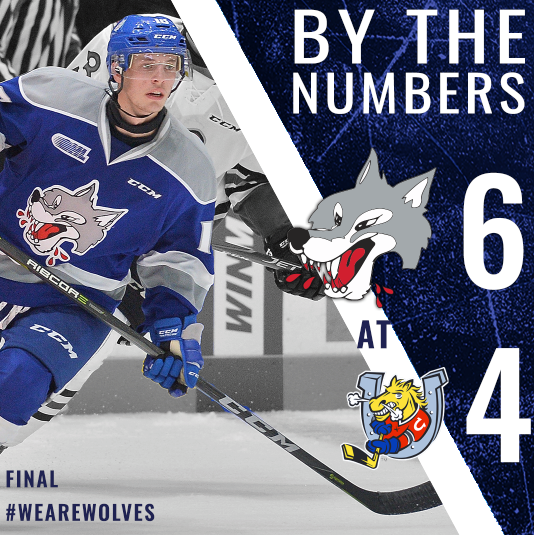 The Sudbury Wolves traveled down highway 400 to Barrie to close out the home and home rematch against the Colts at the Barrie Molson Centre. It was a comeback story game after the Wolves trailed the Colts for the majority of the matchup. The pack regrouped in the third period, scoring three goals to tie the game, take the lead and secure a 6-4 final. Wolves goal scorers included Nolan Hutcheson and Quinton Byfield with two goals each, while Macauley Carson and Emmett Serensits each scored one. Final shots on goal were 38-18 in favour of the Wolves.

In the first period, the Wolves got off to a slow start scoring late in the opening frame to tie the game at 1. Luke Bignell scored the first goal of the game after he beat Jonathan Lemaire just over five minutes in. Nolan Hutcheson then scored the game tying goal when he sent one in from the slot. Tyler Tucker matched his goal to give the Colts a one goal lead before the end of the period. Tyler Tucker recorded his second of the night off a pass from Ben Hawerchuk to put the Colts up by two to start the second period. Following the Colt’s third goal of the night, Ukko-Pekka Luukkonen relieved Jonathan Lemaire from the crease. Macauley Carson brought it back to a one goal game when he potted a nice goal. He carried it around the circle and down through the slot to beat Jet Greaves. Sam Rhodes extended the Colts lead when he beat UPL to make it 4-2. Quinton Byfield then brought the Wolves back within a goal on a breakaway.

The Wolves completed the comeback in the third period scoring three goals to take the lead and claim victory. Nolan Hutcheson and Quinton Byfield both netted their second goals of the night. Nolan Hutcheson tied the game up with a rebound goal off of Adam Ruzicka’s shot while Quinton Byfield scored blocker side to take his 25th on the season. In the final 2 minutes of the game, Jet Greaves got the nod to the Colts bench for the extra attacker. Emmett Serensits then extended with Wolves lead by an extra goal to secure the win with a 6-4 final.

The Wolves will wrap up the weekend on the road in Hamilton where they will face off against the Bulldogs on Sunday at 2:00pm. Fans can follow the action by tuning in to CKLU 96.7 or listening to mixlr.com/sudburywolves.