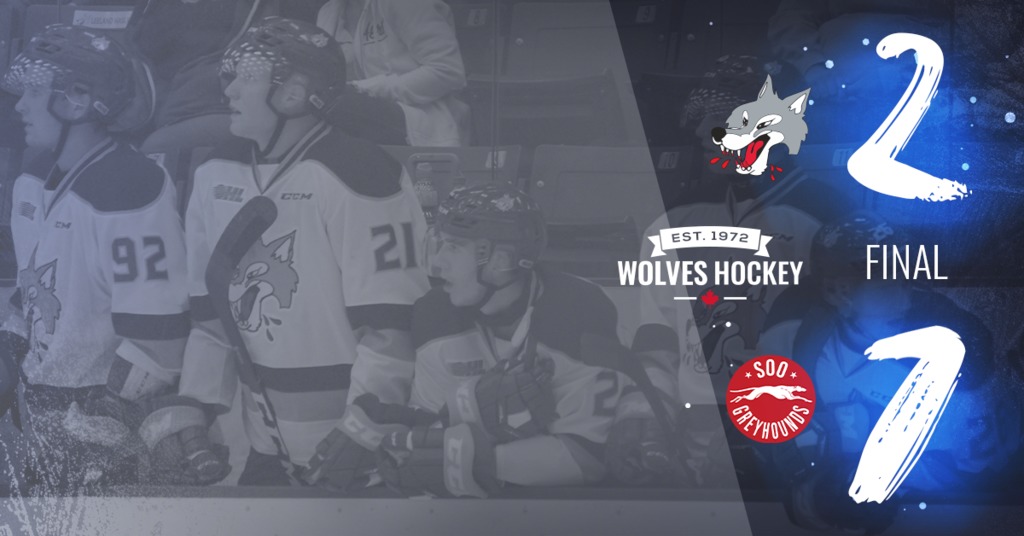 The Wolves played their first pre-season game of the 2019-20 season Saturday night at the Sudbury Community Arena. The visiting team came out on top with a 7-2 final over the home town Wolves as a number of new players got their OHL feet wet.

The visiting Greyhounds had a quick start out of the gate as Joe Carroll put the Greyhounds on the board just over a minute into the game. Late in the first, Tanner Dickinson notched another to extend their lead to two. The Wolves trailed the Greyhounds 2-0 heading into the first intermission despite having a number of solid chances.

The second period was a quiet one as Joe Carroll scored a short-handed marker to make it his second of the game just over six minutes in.  The Wolves trailed 3-0 after forty minutes with shots on goal 19 to 16 in favour of the Greyhounds.

It was a very busy third period with a combination of six goals scored between the two squads. The Greyhounds scored one early in the period before Owen Gilhula got the Wolves on the board a minute later. The Greyhounds then scored three unanswered goals before Macauley Carson added one more for the home team to end in a 7-2 final.

Having just finished their training camp, the Wolves have had little time to get to know their teammates and will look to build chemistry as their pre season action continues.

The Wolves will look to rebound Sunday when they travel to Ottawa to face off against the 67s at 4:00pm. Fans can follow our Facebook and Twitter for score updates.

Regular season action gets underway September 19th on the road before returning home to the Sudbury Arena on September 27th against the North Bay Battalion. Tickets are on-sale now at greatersudbury.ca/tickets.