Wolves Fall to Greyhounds in Shoot-out 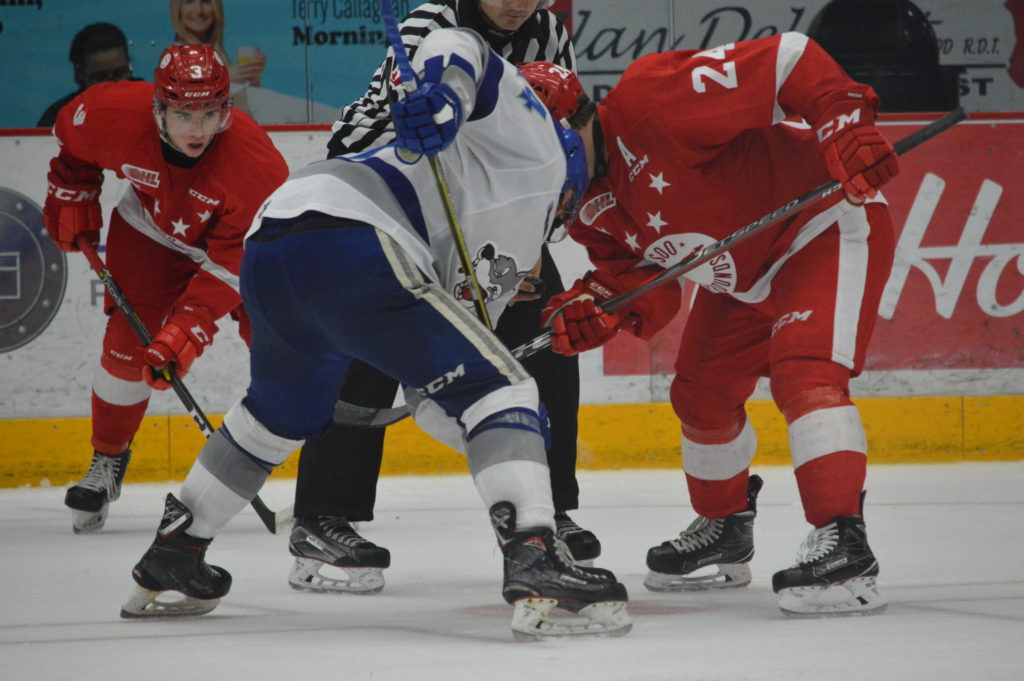 Thursday night hockey at the Sudbury Arena had the Wolves taking on the Soo Greyhounds in the final home game of the pre-season. In an entertaining hockey game between the two Northern rivals, the Greyhounds came out on top after four shootout rounds, with a 4-3 final. Rookies Eric Eschweiler and Quinton Byfield, along with Anthony Tabak found the back of the net for the Wolves.

After a strong training camp, Eschweiler was called up to skate for the Wolves, where he made his presence felt as he scored his first pre-season goal. Quinton Byfield also score his first of the pre-season, while Anthony Tabak’s marker was his second in exhibition play.

Just over a minute into the opening frame, Zack Trott beat Jake McGrath off a scramble to give the visitors a 1-0 lead. Neither team was able to find the back of the net for the remainder of the first. Each period the Wolves out-shot the Greyhounds, doubling up in the first by 12-6.

A tic-tac-toe play between Eschweiler, Nolan Hutcheson, and Cole Candella tied the game mid-way through the second. Minutes later, a top-shelf laser from Byfield gave the Wolves the lead. As time wound down, the Greyhounds capitalized on a power play to tie the game heading into the intermission.

The teams exchanged goals in the third period as Trott tallied his second of the game before Tabak tied it at 3. With regulation time not being enough, the teams went to a shootout where the Greyhounds solidified a 4-3 win. Final shots on net were 40-23 in favour of the Wolves.

Following tonight’s final home-ice pre-season game, the Wolves will head north for a neutral site exhibition game in Timmins against the Rouyn-Noranda Huskies at 7:00pm. Fans can follow the game through Wolves Radio hosted on CKLU 96.7 as we get set for another exciting season of Wolves Play-by-Play. Fans can also catch the game online by downloading the Wolves App on www.mixlr.com/sudburywolves.

The Wolves will open their regular season on the road next weekend before returning home September 28th to face the Oshawa Generals in their 2018-19 Home Opener. Tickets are on-sale now at the Sudbury Arena Box Office.