Wolves Get Revenge in OT 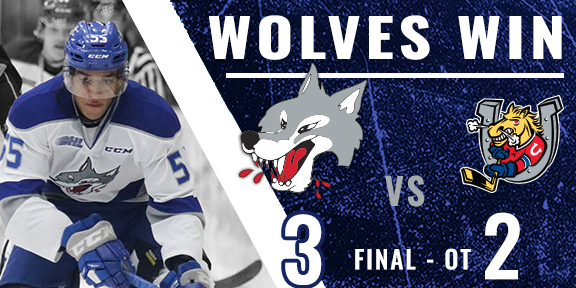 It was the second comeback win of the weekend as the Sudbury Wolves overcame a two-goal deficit in the third period to take a 3-2 overtime victory against the Barrie Colts Sunday. In a revenge match-up, Quinton Byfield was the OT hero and Ukko-Pekka Luukkonen back-stopped his way to first star honours.

Darian Pilon, Emmett Serensits, and Quinton Byfield all scored for the Wolves en route to the win.

Colts’ forward Ryan Suzuki was the lone visitor to find a way past Luukkonen. Suzuki’s first goal came nine minutes in to the opening frame as he went top shelf to give the Colts a 1-0 lead. The rivalry boiled over between the teams in the dying minutes of the period as Blake McConville and Christopher Cameron dropped the gloves.

It was the netminders who stole the show in the second period as Luukkonen and Kai Edmonds were kept busy between the pipes. Despite outshooting the Colts, 21-16, the visitors continued to lead 1-0 after two periods.

Three minutes in to the final frame, Suzuki and Lucas Chiodo connected on a 2-on-0 to allow the Colts to extend their lead to 2. Hard work from the Wolves finally paid off as midway through the frame, Darian Pilon released a one-timer to cut the lead in half. Momentum continued for the team as a hard shot from Emmett Serensits was redirected by a Colt’s player to tie the game at 2. Pilon and Serensits’ goals come as their first on the season.

In the extra frame, Macauley Carson made a feed over to Byfield who scored the game winning goal, taking the extra point over the division rival. With the goal, Byfield now has six points in five games.

The Sudbury Wolves will now get set for a three-game road trip next weekend as they travel to Niagara, Erie, and Kitchener. Action will start on Thursday night in Niagara with a 7:00pm puck drop. Fans can follow the action by listening live on CKLU 96.7 or on mixlr.com/sudburywolves.