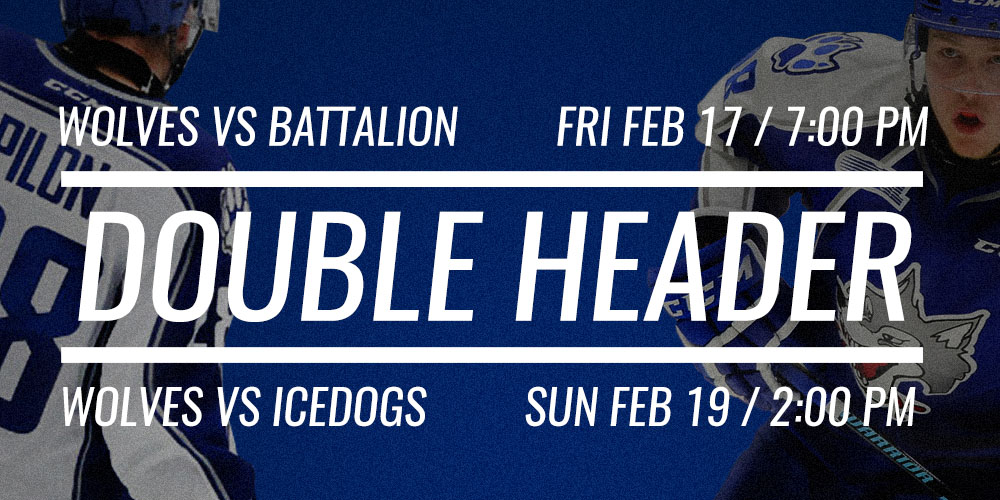 The Sudbury Wolves return to action at the Sudbury Arena on Friday February 17th to host their Northern rivals, the North Bay Battalion at 7:00pm. The Wolves will hit the ice once again on Sunday February 19th at 2:00pm to host the Niagara IceDogs in a Superhero afternoon matinee.

The Battalion are led up front by Vancouver Canucks prospect Brett McKenzie who leads the Battalion offensively with 24 goals, 31 assists and 55 points in 52 games.  Overage forward, Steve Harland sits second in team scoring with 22 goals and 28 assists in 50 games. In net, the Battalion line-up features Dallas Stars prospect Brent Moran who holds a record of 14-16-2 this season and a 3.46 GAA.

Friday’s game is sponsored by Teacher’s Life in support of the CMHA Talk Today Program and Petryna Advertising. Visit the CMHA booth in the lower lobby for the chance to win a team autographed Sudbury Wolves hockey stick. Don’t miss the Petryna t-shirt toss in the first intermission where lucky fans will receive sums of money in some of the t-shirts. CMHA will also be on hand to hand out anti-stress pucks upon exit of the game.  Prior to the game, Toronto Celebrates Sudbury will also be on hand for the ceremonial puck drop and to make a special cheque presentation. 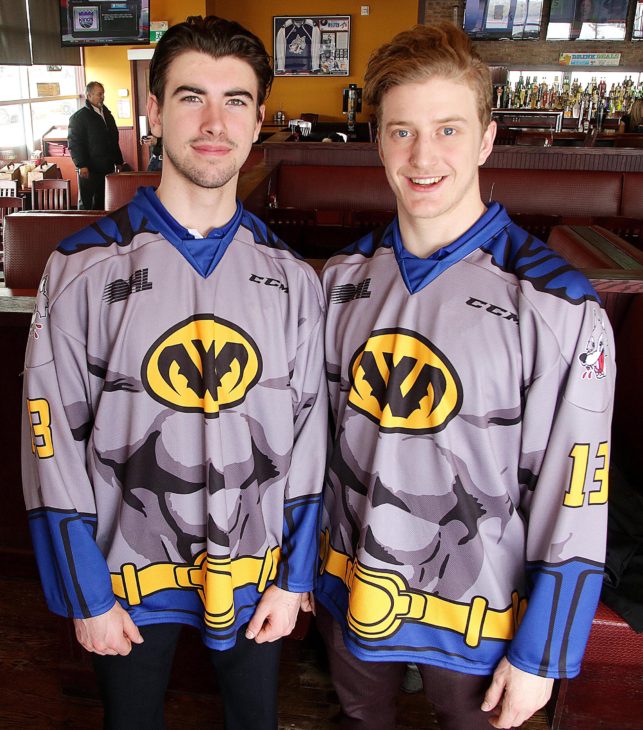 The Wolves will hit home ice once again on Sunday afternoon at 2:00pm against the Niagara IceDogs. It’s Superhero Sunday in support of NEO Kids where the Wolves will wear special Batman themed jerseys that will be auctioned off throughout the game with all proceeds going to NEO kids.

The IceDogs are led by New York Rangers prospect Ryan Mantha who leads the team with 13 goals, and 36 assists for 49 points in 53 games. The overage offensive defenceman currently sits 4th in the OHL in points among all defencemen. Johnny Corneil sits 2 points behind Mantha for the team lead in points, however sits first in the IceDogs in goals with 24 on the season.

Sunday’s game is sponsored by St. Louis Bar and Grill. Fans are encouraged to dress up as their favourite superhero and they will be awarding prizes to lucky fans in the first intermission costume contest. For more details on the Superhero Game or to see the jerseys, click HERE.

Tickets for both games are still available. However, fans are encouraged to purchase tickets early for Sunday’s game as there is limited seating available. Come join the fun in a new era of Wolves hockey! Tickets are on-sale now at the Sudbury Arena Box Office or online at greatersudbury.ca/tickets. Avoid the lines and come down early to get your seats today. For Group Sales and special programs call the Wolves Office at 705 675 3941 or email kate.furlotte@sudburywolves.com.

Prior to this weekend, the Wolves will head to Sault Ste. Marie on Wednesday for Game 5 of the Bell Challenge Cup at 7:07pm. The Wolves currently lead the 6-game series 7-3. After the 2 home games this family day long weekend, the team will head to Peterborough for a Monday matinee match-up with the Petes at 2:05pm.  Fans can tune into both road games on mixlr.com/sudburywolves or on the Sudbury Wolves App.

You can stay up to date with the Wolves and your favourite players by downloading the new Sudbury Wolves App available in the App Stores for iPhone or Android.