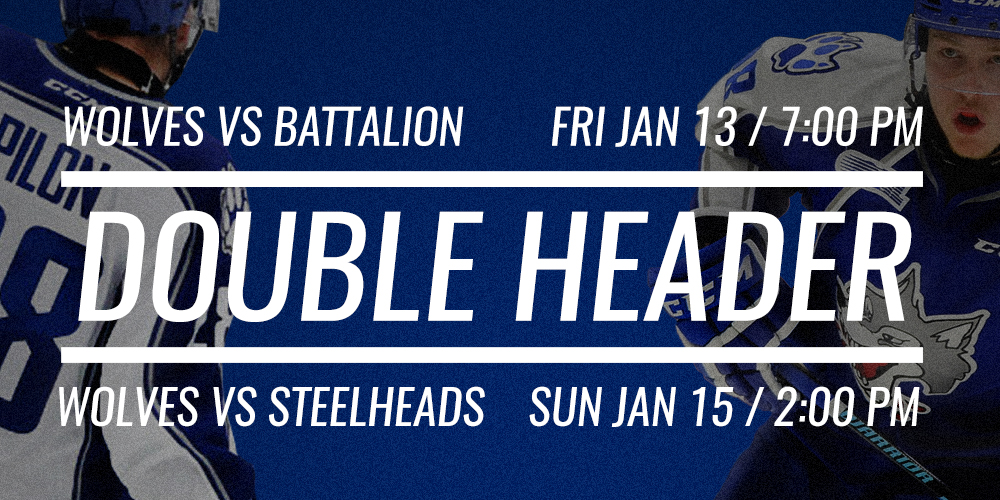 The Sudbury Wolves will continue their 3-game home stand this weekend as they host divisional rivals, the North Bay Battalion and Mississauga Steelheads in double header action at the Sudbury Arena. They will kick things off on Friday night as they host the North Bay Battalion, puck drop is 7:00pm.  Dmitry Sokolov leads the team with 30 goals in 36 games this season, a match of his rookie season totals.

The Battalion are led by Vancouver Canucks prospect Brett McKenzie who sits 18th in OHL scoring with 18 goals and 23 assists. The Battalion line-up also features two local players in Bradley Chenier and Daniel Walker. In net, Dallas Stars prospect Brent Moran holds a record of 11-11-2 and a 3.41 GAA.

The Wolves will return to the ice Sunday afternoon as they host the Mississauga Steelheads in a Sunday matinee, puck drop is 2:00pm.

The Steelheads are led up from by highly rated 2017 NHL Draft prospect Owen Tippett who was selected 4th overall in the 2015 OHL Priority Selection. Tippett currently sits 7th in OHL scoring and leads the league in goals with 33.  The Steelheads roster also features New Jersey Devils prospects Nathan Bastian and Michael McLeod.

Come join the fun in a new era of Wolves hockey! Tickets are on-sale now at the Sudbury Arena Box Office or online at greatersudbury.ca/tickets. Avoid the lines and come down early to get your seats today. For Group Sales discounts and special programs call the Wolves Office at 705 675 3941.

You can stay up to date with Wolves and your favourite players by downloading the new Sudbury Wolves App available in the App Stores for iPhone or Android.