Wolves Host Bulldogs in Fight for the Eastern Conference Lead 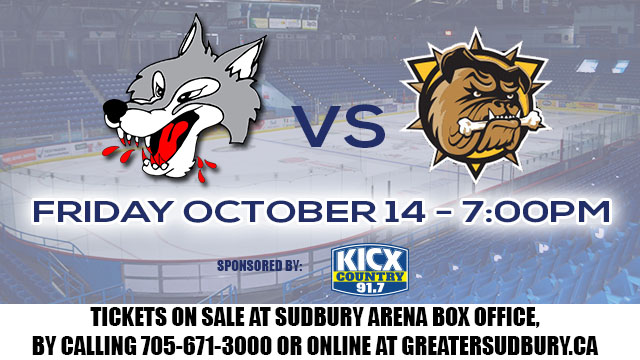 Friday’s game is sponsored by KICX 91.7. Fans who enter a ballot into the KICX 91.7 draw prior to the game, will have the chance to win tickets to see Doc Walker here in Greater Sudbury. In addition one lucky winner will win a qualifier into the KICX Fan Flyaway contest. Draws will be made during the first intermission. Lucky fans will also have the chance to win cash prizes during the KICX T-shirt Toss during the second intermission.

The Sudbury Wolves are also pleased to announce the introduction of “Outside the Lines”, a new weekly video series featuring insight into the players away from the rink. “Outside the Lines” will be featured on social media and digital forums. This week’s edition kicks off with new comer and overage player C.J. Yakimowicz.

Friday’s home game is the first in a home and home series with the Bulldogs as the Wolves will travel to Hamilton on Saturday. Game time is 7pm. The Wolves wrap up their three-in-three weekend on Sunday evening when they visit the Oshawa Generals at 6:05pm. Fans can currently follow the Wolves on the road by following us on Facebook and Twitter for game updates this weekend.

Be a part of the New Era and come join the fun! Tickets are on-sale at the Sudbury Arena Box Office, and available by calling 705-671-3000 or online at greatersudbury.ca/tickets.