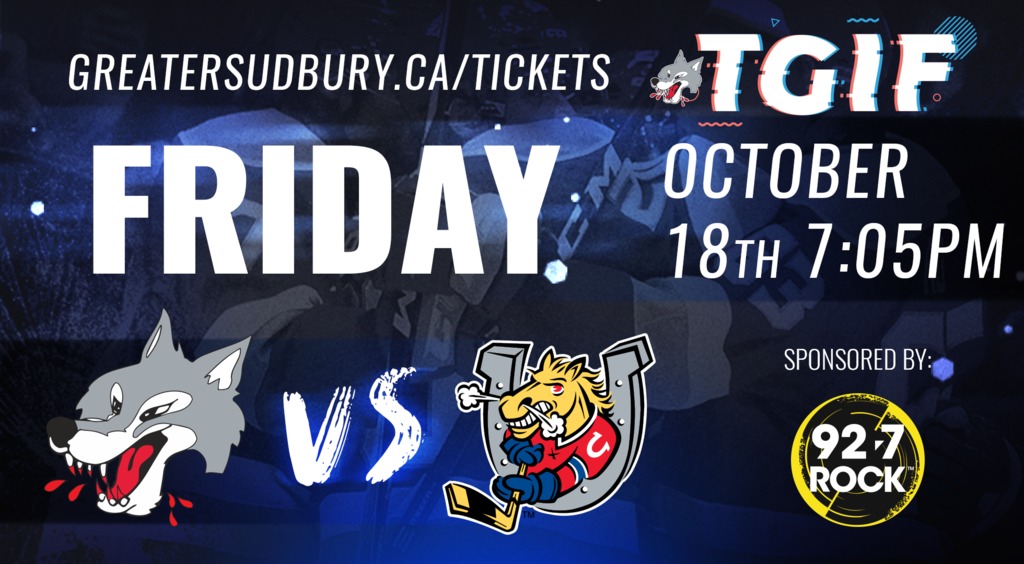 (Greater Sudbury, ON) The Sudbury Wolves return to action at home on Friday night as they host their divisional rivals, the Barrie Colts at 7:05pm. The Wolves will be looking for a big win as the Colts are right on the tail in the Central Division standings. Although early in the season, just one point separates the Wolves and Colts for first in the division.

Quinton Byfield continues to lead the league and team in points with 20 points through 10 games. Jack Thompson also continues his outstanding play with 15 points in 10 games to place him second in the league in scoring amongst defencemen.

Friday’s game is sponsored by Rock 92.7 and one lucky fan will have the chance to win tickets to Offspring and City and Colour during the second intermission. The Wolves will welcome the Valley East Minor Hockey Association Tykes during the first intermission for the first Tim Horton Tyke Mini Game for the first time this season. It’s TGIF Friday and fans are encouraged to come down early and take advantage of the 3-2-1 offers between 6:00pm and 6:30pm, including $3 Tall Boys, $2 Hot Dogs and $1 Popcorn.

Tickets are on-sale now at the Sudbury Arena Box Office or greatersudbury.ca/tickets.

Following Friday’s game, the Wolves will travel to Owen Sound on Saturday and Guelph on Sunday to complete their weekend. Fans can follow the Wolves on the road by tuning into the live play-by-play on CKLU 96.7 and Mixlr.com.