Wolves Host Firebirds and Colts in a Double Header Weekend 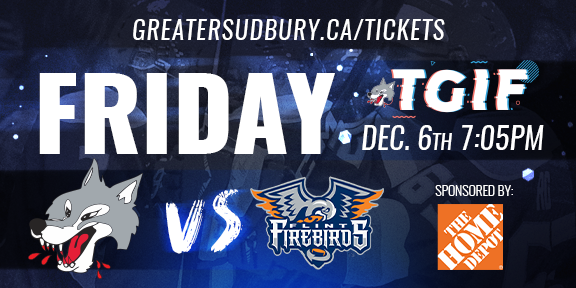 (Greater Sudbury, ON) The Sudbury Wolves look to close out their four game homestand this weekend as they host the Flint Firebirds and divisional rivals, the Barrie Colts after coming off a four-point weekend. Friday night, the Wolves host the Firebirds at 7:05pm, before wrapping up the weekend on Sunday afternoon against the Barrie Colts at 2:05pm.

The Firebirds are led by defenseman Riley McCourt, who sits 7th among all OHL defensemen and 4th in his team with 26 points. Local Sudbury, Ontario native, Zacharie Giroux is expected to be called up to join the Firebirds from the NOJHL Rayside-Balfour Canadians to make his OHL Regular Season debut.

Friday’s game is sponsored by The Home Depot who will be on hand with mini sticks to the first 1000 fans. One lucky fan will also walk away with a $100 gift card to Home Depot, visit their table in the lower lobby for more detail. Take advantage of the TGIF 3-2-1 offers with $3 tall boys, $2 hot dogs and $1 popcorn between 6:00 and 6:30pm.

The Barrie Colts enter this match-up trailing the Wolves by five points in the Central Division. Their offense is led by both Carolina 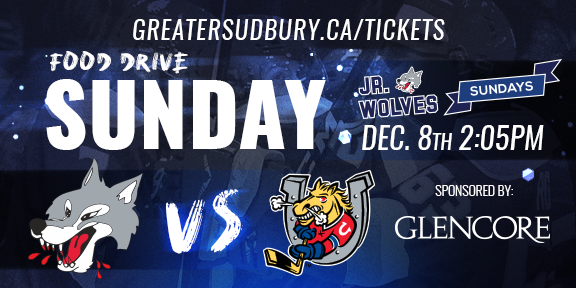 Sunday’s game is sponsored by Glencore! Fans are encouraged to bring non-perishable food donations to the game in support of the Sudbury Food Bank. Fans who donate will also have the chance to win great prizes courtesy of Glencore and the Sudbury Wolves. It’s Junior Wolves Sunday, so don’t forget your skates to join the team for a post-game skate.

Don’t miss out on exciting Wolves Hockey action and get ready to run with the pack. Tickets are on-sale now for both games at the Sudbury Arena Box Office or online at greatersudbury.ca/tickets.