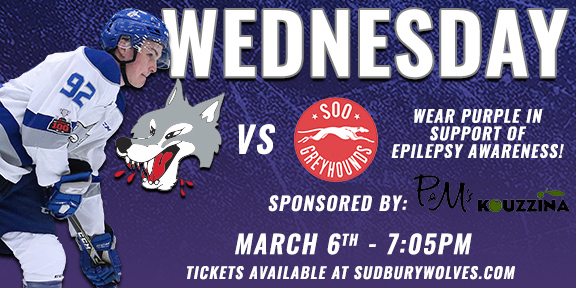 (Greater Sudbury, ON) Wolves hockey action will return to the Nickel City this Wednesday as the Wolves host the Sault Ste. Marie Greyhounds at 7:05pm. Wednesday’s game marks the team’s second last home game of the regular season and the 6th and final game in the Bell Challenge Cup.

This past weekend, the Wolves picked up 4 out of 6 points as they beat the Owen Sound Attack 9-1 on Friday, won against the Oshawa Generals 5-4 on Saturday, and fell to the Battalion 4-2 on Sunday in North Bay.

Sudbury currently sits second in the Eastern Conference with 83 points on the season through 62 games. The Greyhounds sit third in the Western Conference with 87 points through 62 games and are led upfront by Philadelphia Flyers prospect Morgan Frost who is currently ranked first in the league’s scoring race with a total of 107 points in just 55 games. Overage forward Keegan Howdeshell has collected 73 points in 62 games, 43 of those being goals. Toronto Maple Leafs prospect Mac Hollowell leads from the blueline with 72 points in 58 games including 23 goals and 49 assists.

Wednesday’s game is sponsored by P & M Kouzzina in support of Epilepsy Awareness. Fans are encouraged to show their support by wearing purple to the game. Those wearing purple will have the chance to win tons of great prizes! Pick up your purple airplane from one of our volunteers for $1.00 for the chance to win a $50 P& M Kouzzina gift certificate in the second period airplane toss.

Great seats are still available! To purchase tickets for the game, visit greatersudbury.ca/tickets or Sudburywolves.com and in person at the Sudbury Arena Box Office.

Following Wednesday’s game, the boys will travel down south this weekend to match-up with Eastern conference rivals, the Niagara IceDogs on Friday at 7:00pm and the Hamilton Bulldogs on Saturday at 4:00pm. To follow the Wolves on the road, fans can tune into the live play-by-play on CKLU 96.7 or stream it live on mixlr.com/sudburywolves. Both games will also be broadcasted on Eastlink Channel 10 and 610HD