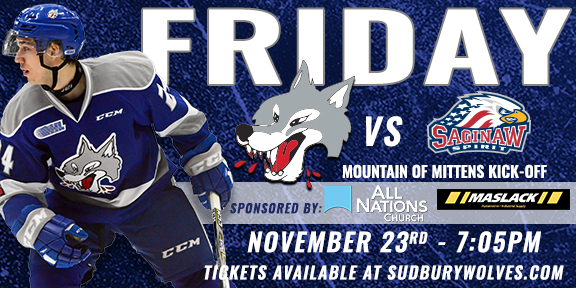 (Sudbury, ON) Wolves Hockey action continues this Friday night when the Wolves kick-off a double header weekend against the Saginaw Spirit who make their one and only appearance of the season at the Sudbury Arena at 7:05pm. Saturday, the Wolves will host the Mississauga Steelheads at a special family friendly time of 4:05pm. The Wolves are coming off a solid weekend where they picked up 4 of 6 points on the weekend.

Friday’s game is sponsored by Maslack and All Nations Church who will be on hand to kick off their mountain of mittens campaign. Fans can purchase mittens from All Nations Church at tables set up throughout the arena for the chance to win one of three $50.00 Maslack gift cards in the Mitten Toss during the second intermission.

Saturday’s game is sponsored by The Home Depot who will be on hand with drawstring knapsack bags for the first 500 fans to enter the building. Fans can participate in the Mystery Puck game at The Home Depot kiosk in the lower lobby.  Don’t miss the Ryobi on-ice contest in the second intermission where one lucky fan will win a drill/driver & Impact Driver combo kit.

Great seats are available at greatersudbury.ca/tickets or sudburywolves.com and in person at the Sudbury Arena Box Office. New this season, online tickets purchased from your computer or mobile device are now the same price as Box Office. Fans can skip the line, get your tickets early, online, scan your phone or print your tickets and come cheer on your Sudbury Wolves this season!