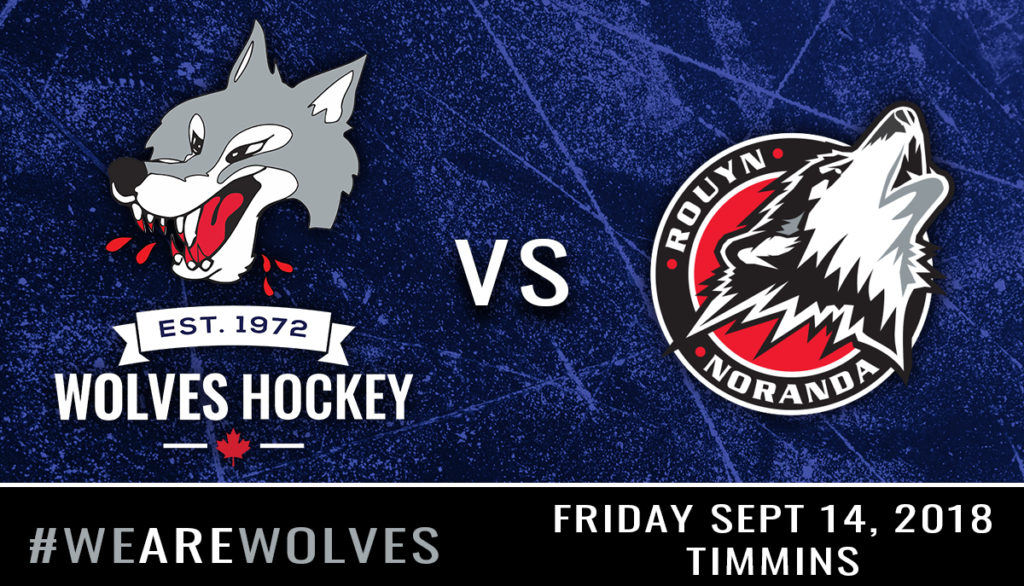 (Timmins, ON) Following Thursday’s final home-ice pre-season game against the Sault Ste. Marie Greyhounds in the Sudbury Arena, the Wolves will head north for a neutral site exhibition game in Timmins Ontario against the Rouyn-Noranda Huskies at 7:00pm on Friday.

The young Wolves led by Quinton Byfield and Blake Murray and the rest of your 2018-19 Sudbury Wolves can be hear for the first time on the road this season on Wolves Radio hosted on CKLU 96.7 as we get set for another exciting season of Wolves Play by Play.  You can catch the game online by downloading the Wolves App on www.mixlr.com/sudburywolves and never miss a second of the action.

The Huskies are led by Pittsburgh Penguins defensive prospect Zachary Lauzon and San Jose Sharks goaltending prospect Zachary Emond.  In a lead-up to the game, Mike Commito, Sudbury Wolves Historian takes a look at a history of Wolves’ Exhibition games in the attached story posted today on sudburywolves.com.

For more information or to reserve your seats all season long visit the Sudbury Wolves Website or contact the Wolves office at 705 675 3941.

The Wolves will be in Timmins, Ontario, this week to take on the Rouyn-Noranda Huskies of the Quebec Major Junior Hockey League. Normally, this type of interleague play would not happen until the annual spring showdown for the Memorial Cup – Canada’s junior hockey crown – but the two clubs are bucking convention in support of a good cause. The exhibition game, held at McIntyre Community Arena, is part of the inaugural United Way Charity Match presented by Bell Let’s Talk in support of youth mental health.

This is the first time the Wolves have participated in this initiative, but the club is no stranger to exhibition games. Long before the Sudbury Wolves joined the Ontario Hockey Association (now the OHL) in 1972, previous iterations of the club drew considerable fanfare to the Sudbury Community Arena, when they hosted National Hockey League teams in the late 1950s and early 1960s.

In October 1956, a week before the NHL regular season commenced, the Wolves took on the Maple Leafs before a crowd of 2,780. Although Toronto handily dispatched their hosts 9-3 in a game that was described as “free-wheeling” and one in which the Leafs reportedly “cruised down the ice unmolested,” fans were treated to an offensive flurry that included four goals by the Maple Leafs in the middle frame. At one point, the Wolves only trailed by a pair of goals, but by the start of the final period, they were down 6-2 and the game was all but over. While the result was not what Sudburians had hoped for, it gave fans, particularly those who watched Tim Horton patrol the blue line for Copper Cliff many years earlier, the opportunity to see him mature into the player who would play an integral part in Toronto’s four Stanley Cups from 1962 to 1967.

When the Maple Leafs returned a few years later, the results were on the scoresheet were much closer. For much of the contest, the Wolves, bolstered by the injection of Toronto players into their lineup, made it a tight game. After Frank Mahovlich, who had turned down a contract offer from the Maple Leafs earlier that day, tied the game 1-1 in the second period, the Wolves kept it knotted. But with less than two minutes remaining, Toronto defenceman Bob Pulford scored the game-winning goal.

The Wolves kept it closer that time around, but even with the additions of Allan Stanley, Marc Rheaume, Gary Edmunson, Johnny Wilson, and goaltender Cesare Maniago in net, were not enough to keep the Maple Leafs at bay. Following the game, Wolves’ coach Murph Chamberlain chuckled that he would be interested in retaining the services of his borrowed players for the balance of his team’s Eastern Professional Hockey League schedule.

A few days later, on October 2, 1959, the Chicago Black Hawks (stylized as two words until 1986) took on the Wolves before 3,385 roaring fans. After the hometown team took a 2-0 lead in the second period, they never looked back. Although Chicago rallied back with two goals, the Wolves held on to defeat their NHL opponents 3-2.

The following year, the Maple Leafs paid another visit. Much like their previous encounter, Toronto lent Sudbury a handful of players, who included Billy Harris, Johnny Wilson, Larry Regan, and Cesare Maniago, in order to keep things interesting. At one point in the game the Maple Leafs actually trailed 3-1, but, bolstered by the big league-scoring touch of Dave Keon and Red Kelly, they stormed back to end the contest in a 4-4 tie. The matchup proved to be a good tune up for Maple Leafs goaltenders Johnny Bower and Cesare Maniago. Bower stopped 41 of the 45 shots he faced, while Maniago, who spent some time in the Sudbury crease, was integral in turning away the 32 shots from his regular teammates.

The tradition of hosting NHL clubs continued again the next year with the Wolves hosting the Black Hawks and the Montreal Canadiens within the span of a week in early October. After Sudbury was defeated 6-1 by Chicago, largely by a three goal performance by Bobby Hull, the Wolves were held off the scoresheet when the Canadiens came to town. On October 10, 1961, Montreal shutout Sudbury 3-0, with Wolves’ goaltender Carl Wetzer turning in a valiant performance – turning aside 39 of the 42 shots he faced. Meanwhile, in the other crease, Jacques Plante and Cesare Maniago, who was no stranger to the Sudbury Community Arena, weren’t as busy, only having to stop nine shots.

The days of hosting NHL clubs in exhibition games are long gone, but it was not that long ago that Sudbury had squared off against Rouyn-Noranda. That matchup, however, was not part of preseason play. Rather, it was slotted into the middle of the regular season during the 1999-00 campaign, a wrinkle that irked some of the players. Norm Milley, who was in his final season with the club, remarked that he believed in “sticking in your own league and then when the Memorial Cup comes, the best plays the best.” Moreover, at the time, Wolves head coach Bert Templeton noted to the Sudbury Star that he didn’t know much about the Huskies and would rather not play them.

Not all of the Wolves were on board with interrupting their schedule to take on an opponent from a rival league, but that didn’t stop the team from putting on a memorable performance for the 4,424 spectators in attendance.  In a highly raucous affair, Sudbury blanked Rouyn-Noranda 4-0. Bench boss Templeton later said he was surprised by the nastiness he saw on the ice between the two unfamiliar foes. “The game didn’t appear it was going to be chippy, then there were a few incidents that got it going,” he told the Star.

Following the game, the Wolves’ Taylor Pyatt credited his team’s performance with their physical play. “We knew we’d have to be physical. All the interlocking games have been so far and we have a big team and that’s kind of the game we have to play. There was a lot of stick work and lots of hits, but we stood up to them,” he proclaimed.

This week’s game between the Huskies and Wolves will most likely be less scrappy than the contest played between the two teams nearly two decades ago, but there will be no shortage of good-spirited competition. With each club vying to prove who belongs to the better league, bragging rights are on the line for the canine crews. Regardless of the outcome on the ice, the Huskies and Wolves can take pride in knowing that their partnership to raise funds for the United Way Centraide North East Ontario Timmins branch and its local youth mental health program offerings will make a difference in the community.

The puck drops at the McIntyre Community Arena Friday night at 7:00pm.