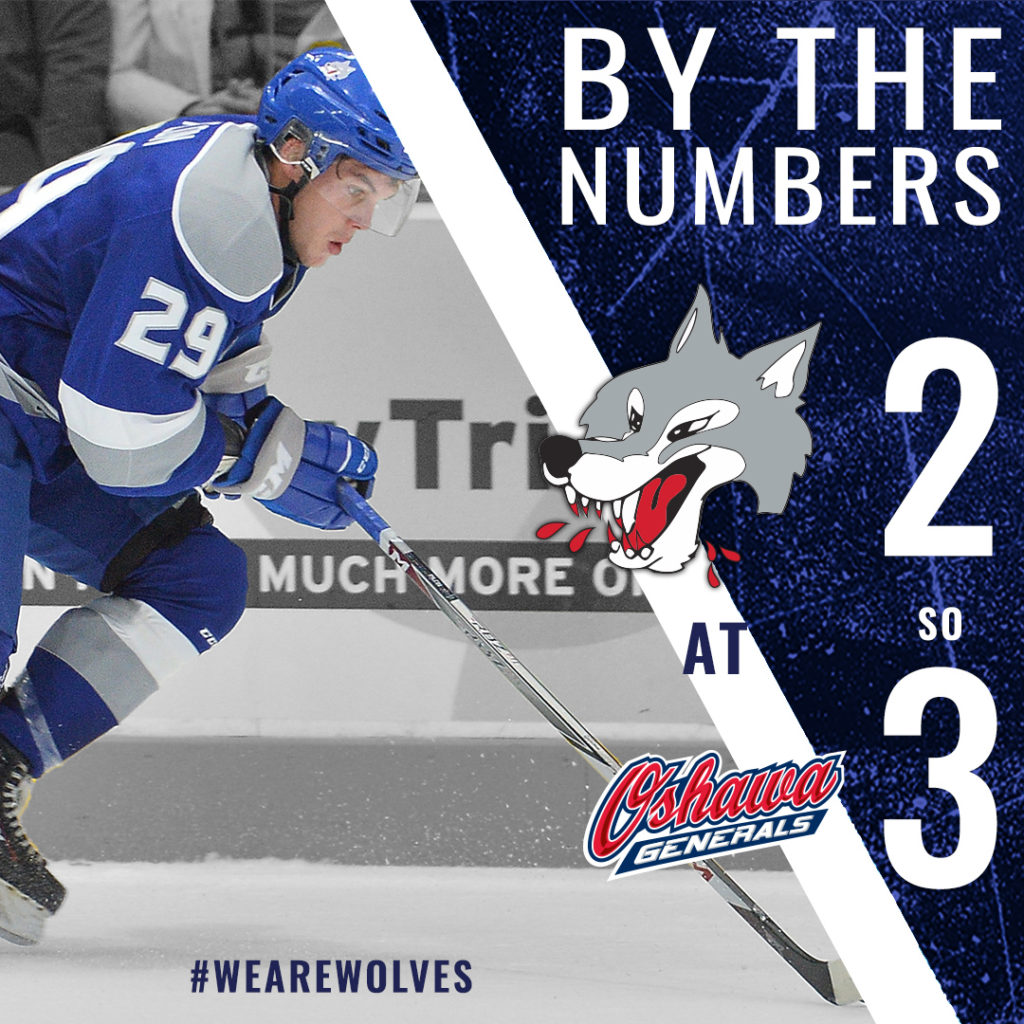 The Sudbury Wolves spent family day at the Tribute Communities Centre in Oshawa Monday afternoon. After forcing the game into overtime and a shootout, the Wolves took home one point falling 3-2 to the Generals with final shots on goal 37-26 in favour of Oshawa. Darian Pilon and Quinton Byfield were the Wolves goal scorers in regulation while Adam Ruzicka was the lone goal scorer in the shootout.

The Sudbury Wolves struck early in the first period with a goal from Darian Pilon to mark his 14th on the season. Brett Neumann tied it up at 8:27 to give the Generals their first goal of the game. Shortly after, Nando Eggenberger beat Ukko-Pekka Luukkonen, forcing the Wolves to trail by one goal after 20 minutes.

It was a scoreless second period as both squads had no intentions on backing off. Despite the Wolves outshooting the Generals 13-7, the Wolves could not beat Kyle Keyser to tie up the game before the buzzer to end the second period.

Finishing things up in the final frame, the Wolves made the comeback and tied the game up at 2. Quinton Byfield had the game tying goal as he fired the puck in from the slot off a pass from Blake McConville. With time winding down, Ukko-Pekka Luukkonen and Kyle Keyser stood tall in net for their respective clubs not letting anything in forcing overtime.

With 5 minutes of 3 on 3 overtime, no goals were scored pushing the game into a shootout. The Generals closed out the shootout with two goals to take the 2 points.

The Sudbury Wolves return to action at home this Friday against the Barrie Colts. The game is set for a 7:05pm start. Great seats are still available at greatersudbury.ca/tickets or in person at the Sudbury Arena Box Office. Skip the line, get your tickets early, online, scan your phone or print your tickets at home and come cheer on your Sudbury Wolves this season!