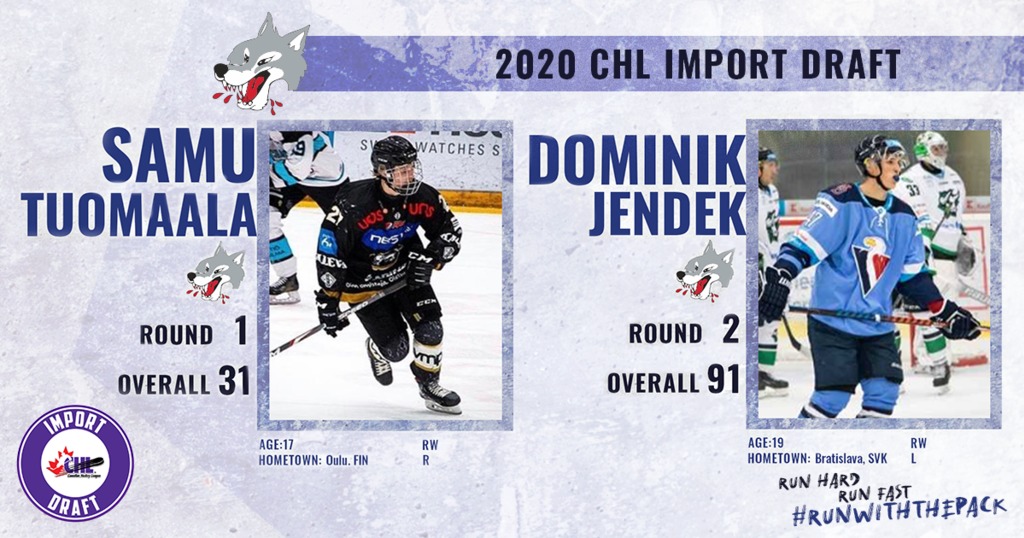 (Greater Sudbury, ON) The Sudbury Wolves are pleased to announce they have selected two forwards in the 2020 CHL Import Draft which took place earlier today.

In the first round, 31st overall, the Wolves were pleased to select 17-year-old Finnish right-winger Samu Tuomaala. The 5’10”, 165lbs forward played for the Karpat U20 team last season picking up 15 goals and 8 assists through 40 games. He also suited up for Finland’s National Team at the U17 and U18 tournaments last season including the World U17 Hockey Challenge where he scored 3 goals and added 2 assists through five games.

“We were very excited to be able to select Samu in today’s draft,” said Sudbury Wolves VP and General Manager Rob Papineau. “He’s an elite player in his age group in the world and was a standout at World U17 Hockey Challenge last fall. He has excellent speed, a pro shot and is a top-rated prospect for the 2021 NHL Draft.”

With the second pick, 91st overall, the Wolves selected 19-year-old Slovakian left shot forward Dominik Jendek. The right winger suited up for both the U20 and men’s HC Slovan Bratislava teams last season. In 13 games with the U20 team, Jendek scored 7 goals and added 6 assists while additionally scoring 4 goals and adding 3 assists in 39 games with the men’s team.

“We were also pleased to be able to draft Dominik today,” added Papineau. “He’s a 19-year-old who has already played with men in Slovakia as well as played at the U20 World Junior Championship. He is a strong skater with an outstanding work ethic.”

“We were able to add these draft picks to go along with Frederik Dichow and possibly Matej Pekar which sets our hockey club up well for the upcoming season,” explained Papineau.

Tuomaala and Jendek join the list of possible import players to suit up for the Wolves this upcoming season as Dichow and Pekar remain on the team’s frozen protected list.

The Wolves would also like to thank Kalle Loponen for his commitment to the hockey club last season. Kalle has opted to return to Finland next season to pursue pro hockey and the entire organization wishes him the best of luck in his future hockey career.