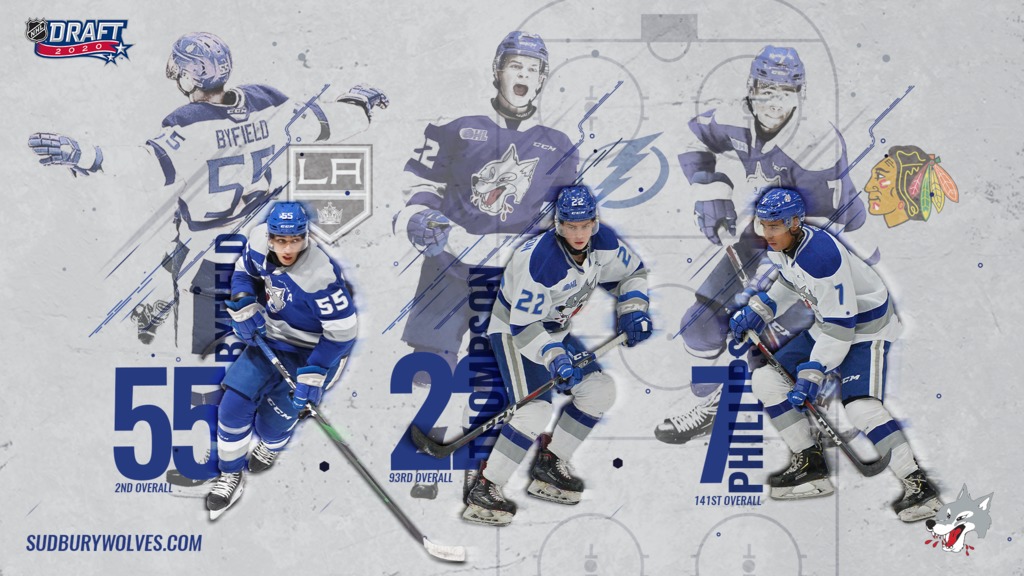 On Tuesday October 6th and Wednesday October 7th, Quinton Byfield, Jack Thompson, and Isaak Phillips had their dreams come true as they heard their names called during the 2020 NHL Entry Draft.

This year’s draft was held virtually due to the COVID-19 pandemic. It was highly anticipated and was one for the record books with a very successful showing for the Wolves.

It was a big event for the Sudbury Wolves and a life changing night for Quinton Byfield. On Tuesday October 6th Byfield was selected 2nd overall by the Los Angeles Kings.

Quinton Byfield became the highest-drafted Wolves player since Mike Foligno who was drafted 3rd overall by the Detroit Red Wings in 1979. Aside from making Wolves history Byfield also became the highest-selected Black player in NHL history.

Congrats to @byfield55 on being the highest drafted black @NHL player ever. To be young, gifted, and black and own it.. it’s more than a moment. Very happy for you and your family! pic.twitter.com/NZto4EyAtg

History has been MADE 👊 Quinton Byfield becomes the highest-ever drafted Black Player in the @NHL history.

We’ve selected Jack Thompson from the @sudbury_wolves of @ohlhockey with pick No. 93!

Wolves’ defenceman Isaak Phillips was the third Wolves player selected, going 141st overall in the 5th round by the Chicago Blackhawks. Phillips became the final Sudbury Wolves’ player to be selected in this year’s draft.

"Chicago was one of the top places I wanted to be…I don't think I could ask for it to go any other way."

Isaak Phillips on hearing his name called by the #Blackhawks!@ChevyDrivesChi | #NHLDraft pic.twitter.com/R7o0cCBQDV

The Sudbury Wolves would like to congratulate Quinton Byfield, Jack Thompson, and Isaak Phillips!