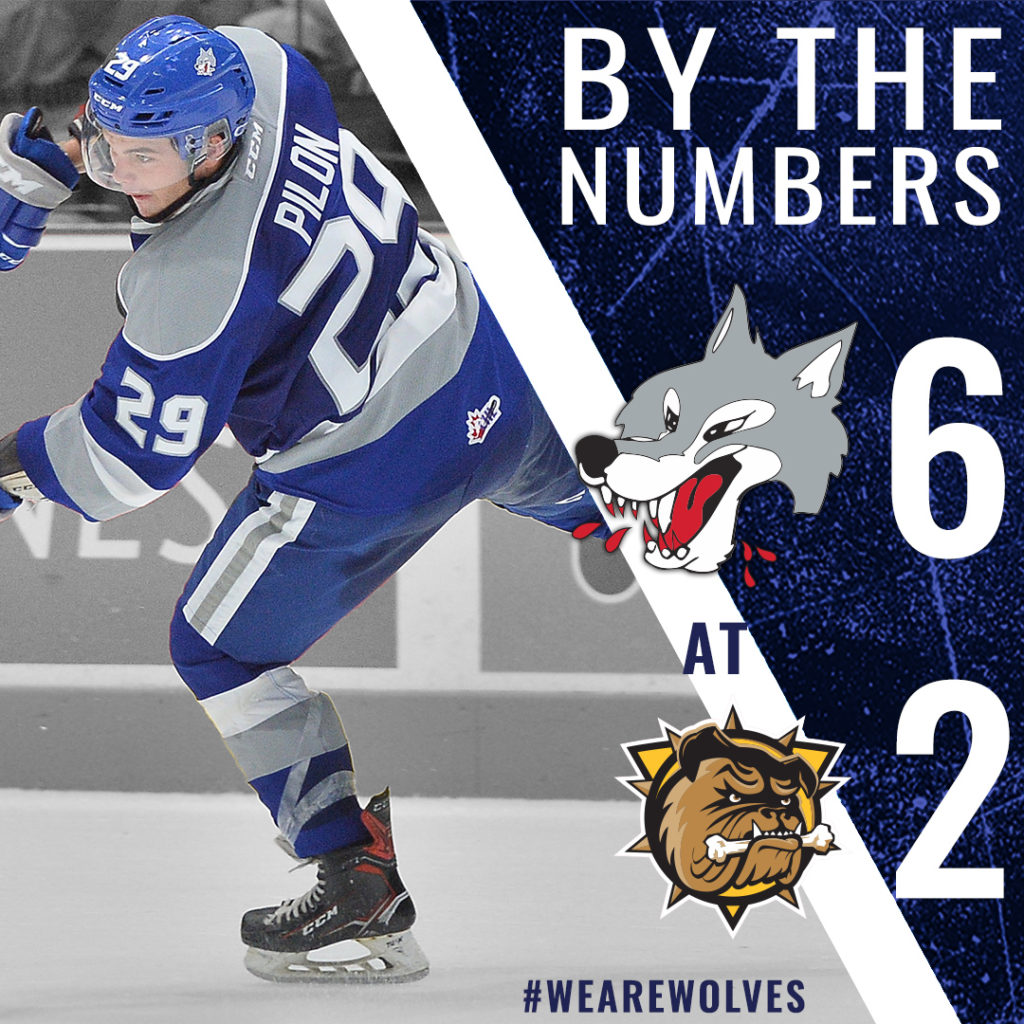 The Sudbury Wolves wrapped up a busy weekend Sunday afternoon in Hamilton where they took on the Bulldogs at the FirstOntario Centre. The Wolves were a power house scoring six goals to take home a 6-2 win over the Bulldogs. Wolves goal scorers included Darian Pilon who notched two while Quinton Byfield, Nolan Hutcheson, Adam Ruzicka and Emmett Serensits all added a single. Final shots on goal were 36-25 in favour of Sudbury. Darian Pilon and Quinton Byfield earned first and second stars of the game.

Quinton Byfield opened the scoring early in the first period for the Wolves just under a minute into the opening frame to take a 1-0 lead. The goal came in off a perfect feed from Shane Bulitka. With the Wolves playing a solid 200-foot game, the Bulldogs were unable to tie it up before the end of period.

In the second period, the Bulldogs scored 19 seconds in to tie the game at one. Liam Van Loon found the open net to beat Ukko-Pekka Luukkonen. Nolan Hutcheson then stole back the lead for the Wolves as he squeezed the puck into the net between Zachary Roy and the goal post while shorthanded. Approaching the end of period, Adam Ruzicka fired in the initial shot at Zachary Roy. Darian Pilon was there to bury the rebound on the power play to extend the Wolves lead to 3-1.

The Bulldogs piled on the pressure moving into the third period. Isaac Nurse made it a one goal game when he fired in a shot outside of the circle to beat Ukko-Pekka Luukkonen glove side. Following the midway mark in the final frame, Darian Pilon redirected in Emmett Serensits’ point shot to extend the Wolves lead to 4-2. Minutes later, Adam Ruzicka scored a beautiful wrap around goal to push the score to 5-2 in favour of the Wolves. With less than 2 minutes remaining in the game, Emmett Serensits sent in a rocket from the point to make it a 6-2 final for the Wolves.

The Wolves will look to continue to build momentum off Sunday’s win when they return to home ice on Friday March 1st at 7:05pm to face-off against the Owen Sound Attack for the final time this season. Great seats are still online at greatersudbury.ca/tickets or Sudburywolves.com.