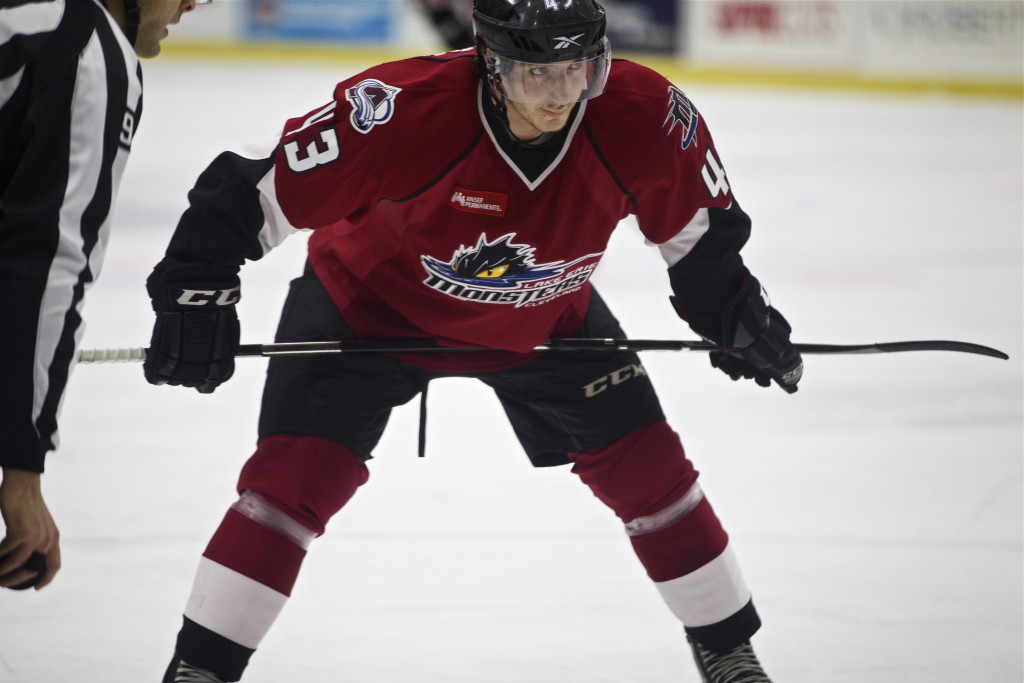 Sudbury Wolves’ alumni forward MICHAEL SGARBOSSA is making a name for himself in his rookie season with the AHL’s Lake Erie Monsters. The 2011-12 OHL top scorer has broke onto the AHL scene this season and currently sits in the top 12 in league scoring with 36 points in 38 games.

SGARBOSSA’S impressive play earned him the honours of representing the AHL’s Western Conference in the annual All-Star Game and Skills competition on January 27th and 28th in Providence, Rhode Island. SGARBOSSA helped lead the Western Conference to a 12-11 victory in the Skills Competition on Sunday night. He participated in the Sher-Wood Puck Control Relay, Pepsi Pass and Score and the H&R Block Breakaway Relay. Despite not putting up any points in the All-Star game, SGARBOSSA did finish with a +2 rating and helped complete the West’s clean sweep of All-Star weekend with a narrow 7 to 6 victory.

The following morning SGARBOSSA was awoken by the call he had been waiting for his entire life. His head coach in Lake Erie was calling to tell him that the Colorado Avalanche had called him up and that he would be making his NHL debut on Wednesday night in Vancouver. The exciting news comes only two weeks after SGARBOSSA was named one of the team’s final cuts in the NHL’s shortened training camp. SGARBOSSA will be looking to make his mark in his stint with the big club as he looks to find himself a permanent spot on the Avalanche’s roster.

SGARBOSSA was acquired by the Avalanche in a deadline day deal that sent T.J GALIARDI along with DANIEL WINNIK to the San Jose Sharks in exchange SGARBOSSA, JAMIE MCGINN and MIKE CONNOLLY. Prior to the trade the Sharks acquired SGARBOSSA as an undrafted Free Agent.

SGARBOSSA played just over one and a half seasons with the Wolves where he put up an impressive 164 points in only 103 games. SGARBOSSA’S OHL career was highlighted by his phenomenal 2011-12 season where he earned the EDDIE POWERS MEMORIAL TROPHY (OHL Scoring Title) after tallying 102 points in 66 games. SGARBOSSA is the first Wolves player to win an OHL scoring title since MIKE FOLIGNO accomplished the feat back in the 1978-79 season.

The Sudbury Wolves wish MICHAEL the best of luck as he embarks on his future NHL career!