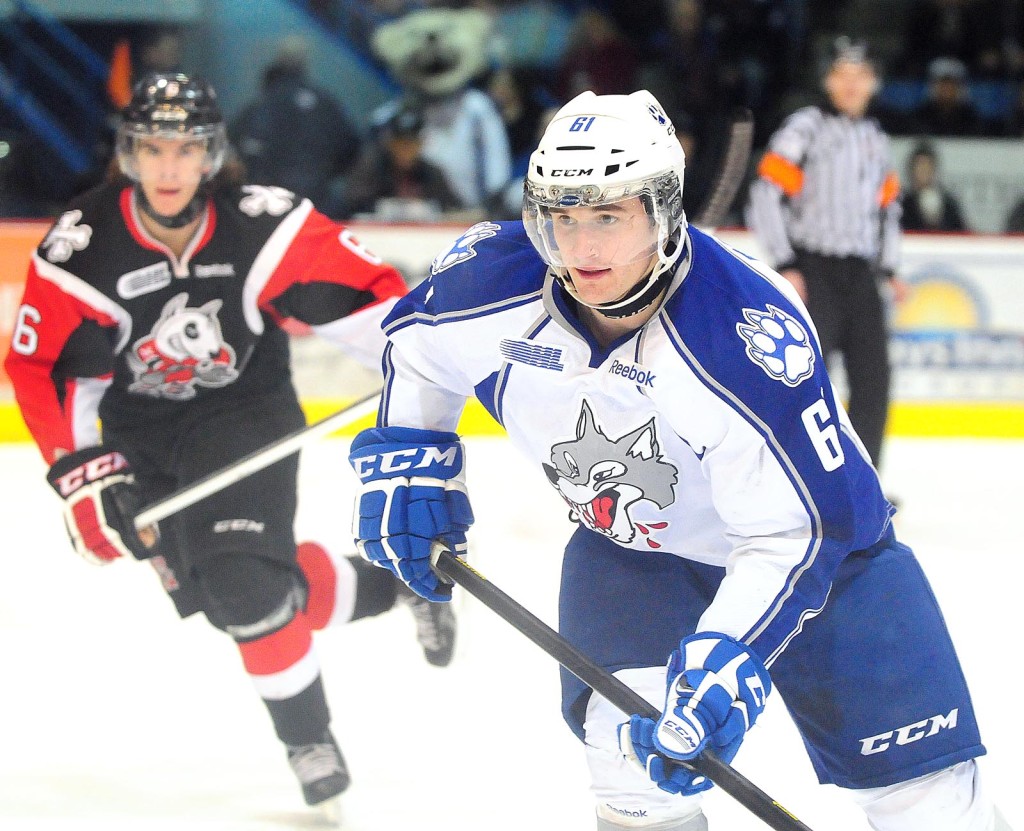 The Sudbury Wolves opened up the second half of their OHL schedule on Friday night against their Central Division rivals, the Niagara IceDogs. Despite the Wolves strong effort in the game they fell just short of a victory as the IceDogs came out on top in overtime by a score of 4-3. With the overtime loss, the Wolves have now extended their regulation unbeaten streak to six games where they have posted a 3-0-2-1 record.

The IceDogs would jump out to a 1-0 road lead at the 10:04 mark of the first when BROOK HIDDINK fired a shot from the slot past Wolves’ net minder JOEL VIENNEAU. HIDDINK’S goal would be the only marker of the frame, as the IceDogs would carry a 1-0 lead into the first intermission. The Wolves held the edge in shots in the first frame by a margin of 10 to 6.

The Wolves wasted no time getting on the board in the second period as JACOB HARRIS would score one minute into the frame to tie the game up a one. The IceDogs would regain their slim one goal lead on the powerplay just over two minutes later when JESSE GRAHAM fired a rocket past Wolves’ net minder JOEL VIENNEAU. The Wolves would pull even with just under six minutes to play, as MATHEW CAMPAGNA would beat IceDogs’ net minder CHRIS FESTARINI top shelf after receiving a beautiful pass from linemate NATHAN PANCEL. With the goal, CAMPAGNA extended his league leading point streak to 12 games. The Wolves would outshoot the IceDogs for the second straight period by an 11 to 6 margin.

The IceDogs would regain the lead on the powerplay 1:19 into the third frame when CARTER VERHAEGHE buried home a rebound off of a JESSE GRAHAM point shot. The Wolves would then tie the game up at three with a powerplay goal of their own when NICK BAPTISTE banged home a loose puck in the slot past CHRIS FESTARINI with 10:47 to play. The deadlock would not be broken in the final ten minutes and the game would need to be settled in overtime. The Wolves held the edge in shots in the third period by a 12 to 7 margin.

STEVEN SHIPLEY would go on to be the hero in the extra frame as he beat JOEL VIENNEAU 3:44 into overtime to seal the deal for the IceDogs.

The Wolves will be back in action Sunday afternoon when they face-off against the Sault Ste. Marie Greyhounds in game four of the BELL CHALLENGE CUP. The Greyhounds currently hold a 3-0 lead in the best of six series. The game will be sponsored by BELL. Game time is 2:05 P.M. Tickets for the game can be purchased at the Sudbury Arena Box Office or by calling (705) 671-3000. It’s family day! Children 12 and under will receive admission for only $10.00 when accompanied by an adult!