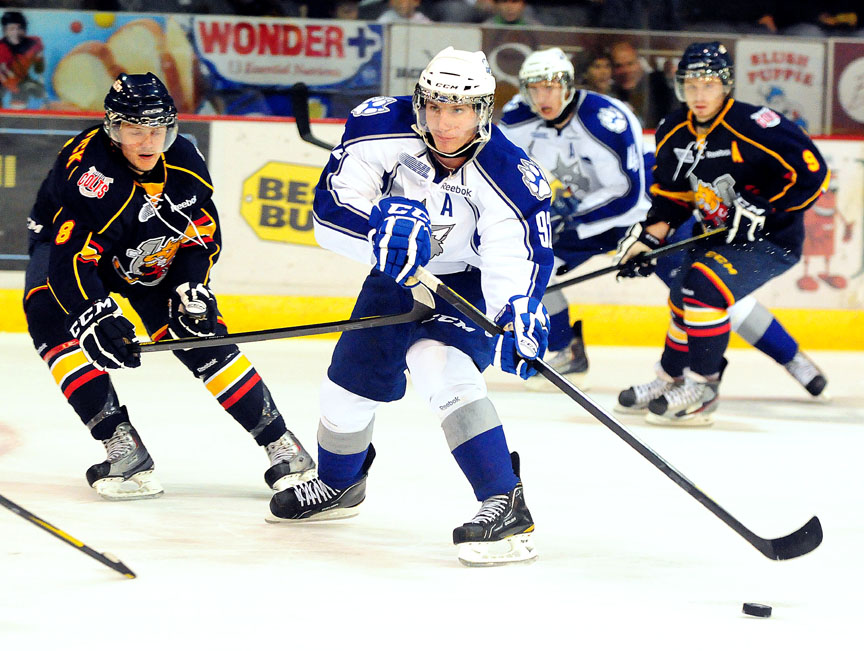 The Sudbury Wolves found themselves fighting back for most of their matinee matchup against the Brampton Battalion on Sunday afternoon.  Trailing 3 – 1, the Wolves climbed back to take a 4 – 3 lead before the Battalion responded with the equalizer, sending the teams into overtime where the Battalion earned the extra point on a late penalty shot for the 5 – 4 win.

Forward MICHAEL SGARBOSSA had a terrific afternoon scoring three times including the go-ahead goal in the third period.  JOSH MCFADDEN (MICHAEL KANTOR, SGARBOSSA) scored the equalizer in the first minute of the third period on the powerplay.  Also earning assists for the Pack were JOSH LEIVO (3), SAM SCHUTT, MCFADDEN, and DEREK SCHOENMAKERS.

Starting netminder JOHAN MATTSSON was solid with 36 saves on the afternoon.

With 4 points during the game, MICHAEL SGARBOSSA has moved to second overall in OHL scoring with 79 points, which includes 39 goals to date.

Forward BRODY SILK left the game midway through the contest with an upper body injury, while JOSH LEIVO was shaken up in a collision in the overtime period. Their conditions will be reassessed for tomorrow’s contest in Mississauga, when the Wolves will spend FAMILY DAY taking on the Majors.  Game time is 2:00pm.