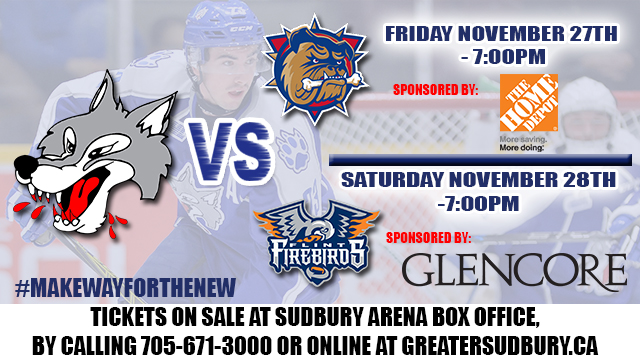 The Sudbury Wolves complete their four game homestand this weekend with visits from the Hamilton Bulldogs and Flint Firebirds. On Friday, November 27th, the Wolves will battle the Hamilton Bulldogs. They will hit the ice once again on Saturday, November 28th when the Flint Firebirds make their only visit the Nickel City. Both games begin at 7:00pm.

This will be the second and final visit Hamilton makes to Sudbury this season. The Bulldogs sit fifth in the East Division and ninth in the Eastern Conference with 17 points. Two 20-year-olds lead the offensive attack for the Bulldogs this season. STEPHEN HARPER and MASON MARCHMENT lead Hamilton offensively, both averaging over a point per game, with 27 and 20 points respectively. 17-year-old defenceman COLE CANDELLA is a player to watch as he currently has 13 points in 23 games.

Friday night is The Home Depot Night! They will be on hand with a number of giveaways for fans including Lucky Row of the Period prizes. Visit the Behr Paints display in the lower lobby. Don’t miss the return of the Behr Paint Roller Challenge during the first period!

On Saturday, the Flint Firebirds make their one and only trip to the Nickel City this season. Flint currently sits third in the West Division with 22 points. The Firebirds are led by projected 2016 NHL draft prospect, WILL BITTEN who leads Flint in scoring with 32 points, which places him 10th overall in league scoring. The Firebirds line-up also features New Jersey Devils 3rd round selection in 2014, CONNOR CHATHAM upfront and Dallas Stars prospect, ALEX PETERS on the blueline. In goal, Flint is backstopped by Carolina Hurricanes 2014 2nd round pick, ALEX NEDELJKOVIC.

Saturday’s game is sponsored by Integrated Nickel Operations Glencore who will be on hand with Thundersticks for fans. There will be collection bins in front of the building for the Local Food and Toy Banks. Lucky fans who donate will have the chance to win great prizes courtesy of Glencore!

Tickets for both games are available at the Sudbury Community Arena Box Office, by calling (705)-671-3000 or online at greatersudbury.ca/tickets!