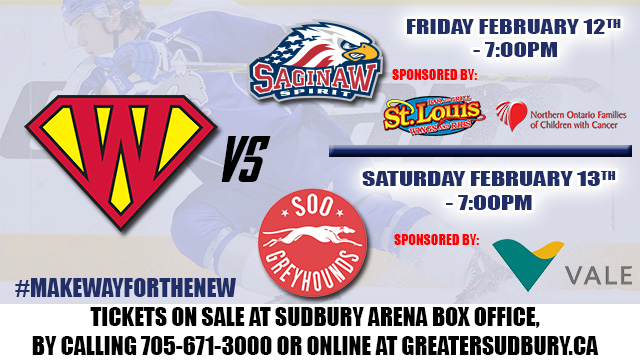 The Sudbury Wolves return home this week looking to build off their 4-point weekend as they host the Saginaw Spirit on Friday and Sault Ste. Marie Greyhounds on Saturday in double-header action at the Sudbury Arena. Both games will have a community and charity focus. Puck drop is 7:00pm.

On Friday night, the Wolves will host the Saginaw Spirit for the one and only time this season. The Wolves are coming off a 6-3 win over the Spirit last Saturday and will be looking to take the season series. The Spirit are led by their Russian Import forward ARTEM ARTEMOV who they selected 28th overall in the 2014 CHL Import Draft. ARTEMOV is in his second season with the club and leads them offensively with 45 points in 51 games.

Friday is ST. LOUIS BAR & GRILL SUPERHERO NIGHT in support of NORTHERN ONTARIO FAMILIES OF CHILDREN WITH CANCER (NOFCC). The Sudbury Wolves will wear special Superhero jerseys, which will be auctioned off during the game in a silent auction to help raise money for the NOFCC. Funds will also be raised through a special superhero raffle and SKATER’S EDGE will also be selling a limited number of Superhero t-shirts for $15 with $5 from every t-shirt sold going towards the charity. Kids 12 and under wearing full superhero costumes will be admitted for only $5 at the door and will receive a voucher for a free small popcorn and pop. There will also be prizes for best superhero costumes. Proceeds from the 50/50 will also be donated to the NOFCC. ST. LOUIS will also be on hand with giveaways and lucky row prizes for fans and will make a special cheque presentation for the NOFCC during the first intermission.

The Sudbury Wolves and Vale will once again team-up to celebrate MINING, HOCKEY & CHARITY; three keys elements of the cultural fabric of Greater Sudbury. Fans in attendance will receive a free set of FIRE & ICE HOCKEY CARDS from Greater Sudbury Fire Services and the first 500 fans will receive scarves to cheer on the Wolves, courtesy of Vale. The SHAFT BOTTOM BOYS will perform during the second intermission and Vale will make a community investment announcement at centre ice with United Way Sudbury and Nipissing District.

Saturday’s game is also sponsored by BELL FIBE as it marks the final game of the BELL CHALLENGE CUP this season. The Wolves only need one point to win the prestigious BELL CHALLENGE CUP recognizing hockey supremacy between the first two Northern Ontario OHL Franchises that are now celebrating their 44th year as members of the Ontario Hockey League.

Don’t miss any of the exciting double header actions! Tickets for both games are now on sale at the Sudbury Arena Box Office by calling 705-671-3000 or online at greatsudbury.ca/tickets!