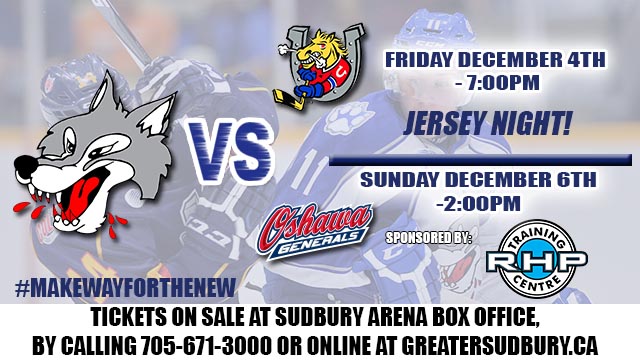 The Sudbury Wolves will host a double header weekend beginning this Friday night when they host the Central Division leading Barrie Colts at 7:00pm. They will hit home ice again on Sunday, December 6th, when the Oshawa Generals make their second and final trip of the season to the Nickel City. Game time is 2:00pm.

Friday’s game will mark the fourth meeting of the season between the Wolves and Colts. Barrie enters play, just two points back of first place in the Eastern Conference. Despite having lost two straight games, the Colts are 7-3-0-0 in their last 10 games. San Jose Sharks Prospect KEVIN LABANC leads the offence for the Colts, collecting 40 points to date this season, which places him in a tie for 6th in league scoring. Other players to watch for the Colts include a couple of Calgary Flames prospects in ANDREW MANGIAPANE who sits second on the team in scoring with 23 points and RASMUS ANDERSSON who leads the defence in scoring with 20 points.

Friday is Hockey Jersey Night! All youngsters 17 and under wearing their hockey jersey to the game will be admitted for only $10.

On Sunday, the Wolves get a second crack at the reigning Memorial Cup Champions, the Oshawa Generals. The Generals enter the weekend 1-7-0-2 in their last 10 games. The Generals are led by 19-year-old winger, JOE MANCHUREK, who has amassed 23 points to date this season. New York Islanders 2014 1st round selection, MICHAEL DAL COLLE is tied for second in team scoring with 21 points. On defence, the team is lead by New York Islanders prospect MITCHELL VANDE SOMPEL.

Sunday’s game is sponsored by RHP Training Centre. Don’t miss the RHP shootout and t-shirt toss during the 1st intermission where lucky fans will have the chance to win great prizes!

Tickets for both games are available at the Sudbury Community Arena Box Office, by calling (705)-671-3000 or online at greatersudbury.ca/tickets!

Prior to this weekend’s double-header, the Wolves will continue the Bell Fibe Challenge Cup when they visit Sault St. Marie on Wednesday, December 2nd to take on the Greyhounds at 7:07pm. Fans can follow the Wolves on the road by tuning into the live play-by-play with Stew Kernan on KFM 95.5.