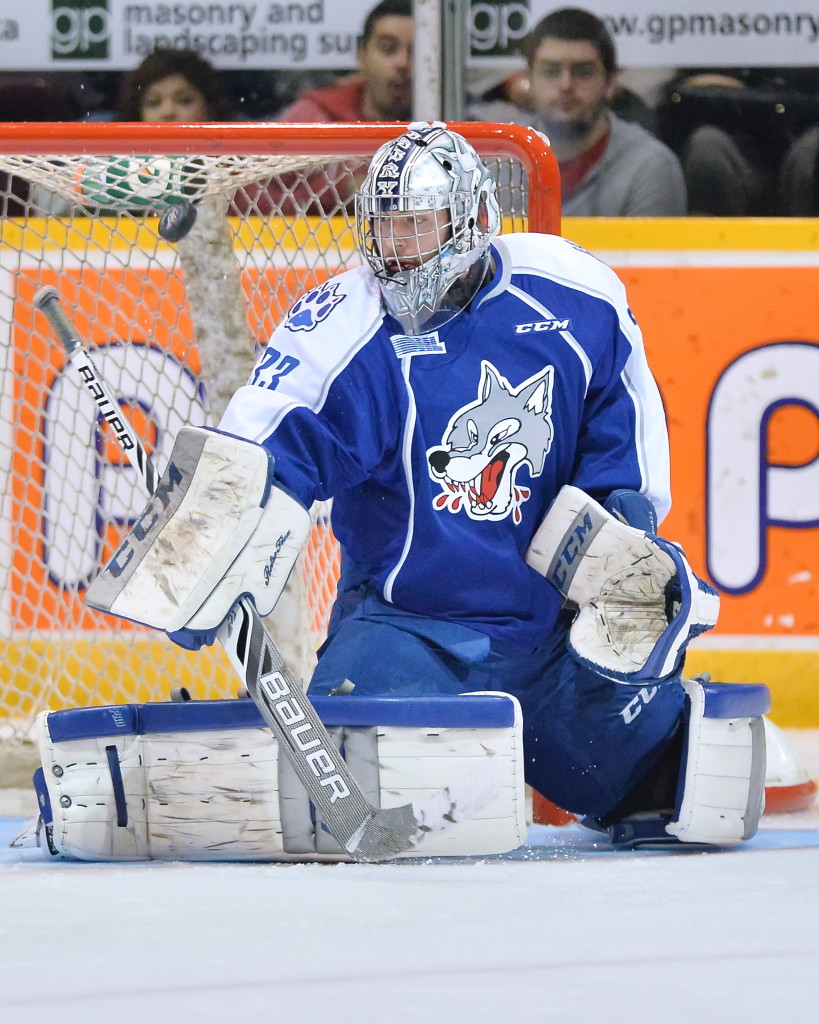 The Wolves were at home Sunday afternoon against the Guelph Storm to wrap up their double-header weekend. Prior to the start of the game, the Wolves honoured former Wolf JACOB HARRIS for his 4 and a half years of commitment to the Sudbury Wolves organization and the City of Greater Sudbury. Extra time was needed in this match as the Wolves went on to win this one in a shoot-out with goals from DAVID LEVIN and RYAN VALENTINI, by a final score of 4-3.

The Wolves got off to a strong start in the first. They played very physical early on and MACAULEY CARON helped set the tone as he dropped the gloves to help spark the Wolves offense. The Wolves got on the board first as MIKKEL AAGAARD scored at 4:27 to give the Wolves a 1-0 lead. DMITRY SOKOLOV gave the Wolves a 2-0 lead at 16:52, with ALAN LYSZCZARCZYK and REAGAN O’GRADY picking up the assists. Guelph cut the deficit in half late in the first period with a goal by MATTHEW HOTCHKISS. Shots on goal at the end of the first period were 20-13 in favor of the Storm.

The second period had plenty of action as ALAN LYSZCZARCZYK scored his 11th goal of the year to give the Wolves back their two goal lead. Guelph clawed their way back with a powerplay goal at 9:56. NOAH CARROLL scored just 20 seconds later to tie the game up at 3 goals apiece. At the end of the second period the Wolves were trailing in shots on goal 32-27.

The third period was a goaltender’s duel between TROY TIMPANO and MICHAEL GIUGOVAZ as both goalies were stellar and stood tall in net. Timpano made 13 saves in the frame, holding Guelph scoreless in the third and forcing overtime, while Giugovaz made 12 saves.

Overtime solved nothing and the game was forced to go into a shootout. DAVID LEVIN scored the first shootout goal, however ISAAC RATCLIFFE tied things up. Four shooters were needed to solve this match as RYAN VALENTINI scored the winner for the Wolves.

TROY TIMPANO stole the show, making 42 saves and earning first star of the night. This game was a very physical affair, with both teams combining for 43 penalty minutes. Guelph capitalized on only one of 7 opportunities. Final shots on goal were 45-39 in favor of Guelph.

The Wolves are back in action next Friday night as they host the Niagara IceDogs at 7:00 pm.Friday is Teen Night and all teens 19 and under will receive admission to the game for only $10. Limited to value seating only. To purchase tickets, visit the Sudbury Arena Box Office or visit greatersudbury.ca/tickets or call 705-671-3000.